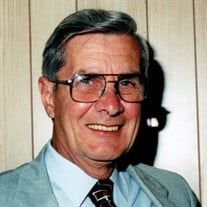 Alan E. Cole, 91, of Johnstown, went to be with his Savior, the Lord Jesus Christ, on Thursday, April 25, 2019 at Wells Nursing Home. He was born on May 26, 1927 in the Bronx, New York City, the son of the late Adelbert G. and Amy M. Young Cole. Alan attended Lakemont Academy in Lakemont, New York then honorably served his country in the U.S. Navy during World War II. Upon his return from service he took two years of high school in one year and graduated in 1948. Mr. Cole attended Simmons School of Embalming and Mortuary Science in Syracuse, graduating in 1948 and joined his Father in the A.G. Cole Funeral Home business. Alan truly loved the business and the people of Fulton County. He was of the Baptist faith, a founding member and Deacon of the Adirondack Baptist Church. Mr. Cole was a former Deacon and Trustee of the First Baptist Church of Johnstown. Alan was the Sunday Superintendent and former Leader of the Boys Christian Service Brigade at First Baptist Church. He also served on the Building Committee for the Church which included the two additions to the Church. Mr. Cole was a former Deacon at Perth Bible Church, leader of the Small Group Ministry at Perth Bible Church and former member of the Board of Directors of the Child Evangelism Fellowship. Alan was a former board member of the Johnstown Public Library, former board member of Evergreen Cemetery, past member of the former Koloneka Grange, past President of the Johnstown Kiwanis Club, member of the former Royal Mountain V.F.W. and member of the former Johnstown American Legion. He was the Fulton County Chairman of the March of Dimes in 1950 and served on the board of directors for the American Red Cross in the 1950s. Mr. Cole was elected the Fulton County Supervisor, Ward 2 in 1965, member of the Board of Directors of Johnstown Cemetery and former member of the Board of Directors of the Salvation Army in Gloversville. Alan was an active member of the Gideons. He is survived by his wife Beverlie Pitts Cole who he married on June 1, 1948, one son Paul Cole and his wife J.J., one daughter-in-law Tena Wright Cole; five grandchildren Matthew Cole, Amy Allen and her husband Jon, Mackenzie Cole, Pierson Cole and Meredith Cole; two great grandchildren Killian Allen and Darcy Allen, and several nieces, nephews and cousins. Mr. Cole is predeceased by his son Dr. Alan G. Cole whom passed on November 28, 2018, one sister Kathern Cole Leggett and one daughter-in-law Catherine Blakeslee Cole. Funeral services will be conducted at 11:00 a.m. on Tuesday, April 30, 2019 at the Adirondack Baptist Church, 1431 State Highway 29, Gloversville. Visitation for family and friends will be on Monday, April 29, 2019 from 5:00 p.m. to 7:00 p.m. at the A.G. Cole Funeral Home, Inc., 215 E. Main Street, Johnstown. Interment with military honors will be in Evergreen Cemetery, Fonda immediately following the funeral service. In lieu of flowers, contributions can be made in Alan’s memory to Adirondack Baptist Church, 1431 State Highway 29, Gloversville, New York 12078. Condolences to the family may be made online by visiting our website at www.agcolefuneralhome.com

The family of Alan E. Cole created this Life Tributes page to make it easy to share your memories.

Send flowers to the Cole family.