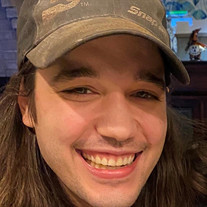 Alexander Richard Simon passed away suddenly in a car accident on Friday, November 20th, 2020. Alex was born on April 13, 1993 to Nicholas Simon III and Marcia Semprevio Simon. He grew up in Johnstown, but he was constantly on the road every summer racing BMX with his brother Nicholas Simon IV. He was an avid skier, which eventually led him to instructing for several seasons. He graduated Johnstown High School in 2011, where he was goalie for the varsity soccer team, a member of the ski racing team, and a member of the marching band, jazz band, and wind ensemble. He worked with his father as an autobody technician at the family business, Nix Autobody. He developed a love for cars and motorcycles. He enjoyed motorcycle rides and car cruises with his friends. Alex had a deep love for music from a young age. He played the drums, piano, and saxophone. He was the drummer in the local, hardcore band Slugworth with his friends Brendon Jablonski, Andy Jung, and Nick Belknap. Alex had an infectious smile and personality like no other. He always saw the best in people and would do anything for the people he loved. He is survived by his fiancé Katlyn Christenson, daughter Ellie Ana Simon born on July 8th, 2020, parents Marcia and Nicholas Simon III, brother Nicholas Simon IV and his wife Abigail, dog Chief, and cat Bagheera. As well as, his maternal grandparents Lynne and Richard Semprevio, paternal grandparents Victoria and Nicholas Simon Jr, and many aunts, uncles, and cousins. Visitation for family and friends will be held on Tuesday, November 24th, 2020 from 11:00 am until 1:00 pm at St. John’s Episcopal Church, 1 N. Market Street, Johnstown. Due to Covid-19 restrictions, attendance at the service is limited. The service will be livestreamed from the church beginning at 1 pm. To access the livestream, go to the church website www.stjohnsjohnstown.org and click on the link provided. In lieu of flowers, contributions can be made to benefit his 4 month old daughter Ellie Ana Simon, which can be sent to A.G. Cole Funeral Home, Inc., 215 East Main Street, Johnstown who has been entrusted with the arrangements. Condolences may be made to the family at www.agcolefuneralhome.com

Alexander Richard Simon passed away suddenly in a car accident on Friday, November 20th, 2020. Alex was born on April 13, 1993 to Nicholas Simon III and Marcia Semprevio Simon. He grew up in Johnstown, but he was constantly on the road every... View Obituary & Service Information

The family of Alexander Richard Simon created this Life Tributes page to make it easy to share your memories.

Alexander Richard Simon passed away suddenly in a car accident...

Send flowers to the Simon family.