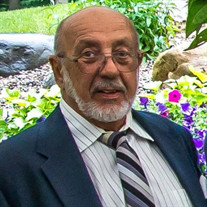 Alva H. Roice, age 85, of Broadalbin, passed away on Wednesday, January 20, 2021 at St. Mary’s Hospital, Amsterdam. He was born on July 19, 1935 in Amsterdam to the late Henry Roice and Josephine Marnelli Roice. Alva was a graduate of Wilbur H. Lynch High School in Amsterdam and honorably served his country in the Army National Guard as a Sergeant for five years. He was first employed as a Draftsman from 1953 to 1958 at General Electric in Schenectady. Mr. Roice later worked for over 33 years at General Telephone Company as a Service Supervisor and Coordinator, retiring in 1991. Alva was of the Catholic faith. He served on the Vacancy Committee of the 5th Ward in Gloversville. Mr. Roice was a member of the St. Patrick’s Lodge #4 F&AM in Johnstown, Gloversville Elks Lodge, the Sacandaga Boating Club, Concordia Singing Society, Tribes Hill Fish & Game Club, Pine Tree Rifle Club, Fish House Fish & Game Club, the Great Sacandaga Lake Fisheries Federation and the Great Sacandaga Lake Association. He was avid outdoorsman whom enjoyed hunting, fishing and trapping and also enjoyed collecting antiques and studying local history. He is survived by one son Daniel Roice (Tina) of Gloversville, one daughter Debra J. Roice of Gloversville; five grandchildren; three great grandchildren and several nieces, nephews and cousins. Alva was predeceased by his wife Faith Carter Roice who he married on February 2, 1974 and who passed on October 14, 1996. Graveside services will be conducted at 1:00 P.M. on Monday, January 25, 2021 at Prospect Hill Cemetery, Gloversville with Rev. Kathy L. Reese officiating. In lieu of flowers, contributions in Alva’s memory may be made to the Great Sacandaga Lake Fisheries Federation, Inc., P.O. Box 991, Northville, New York 12134. Arrangements have been entrusted to the A.G. Cole Funeral Home, Inc., 215 E. Main Street, Johnstown. Condolences to the family may be made online by visiting our website at www.agcolefuneralhome.com

Alva H. Roice, age 85, of Broadalbin, passed away on Wednesday, January 20, 2021 at St. Mary&#8217;s Hospital, Amsterdam. He was born on July 19, 1935 in Amsterdam to the late Henry Roice and Josephine Marnelli Roice. Alva was a graduate... View Obituary & Service Information

The family of Alva H. Roice created this Life Tributes page to make it easy to share your memories.

Send flowers to the Roice family.