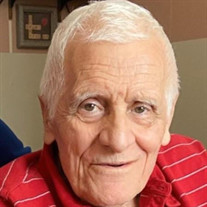 Anthony (Tony) Thomas Samperi, age 85, of Johnstown, passed away on Tuesday October 12, 2021. Born on January 11, 1936, he was the son of the late Antonio and Ninfa (Pollina) Samperi. Tony grew up on Mason Street in Johnstown, NY. He attended Johnstown public schools. He played football and baseball at Johnstown High School and graduated as a member of the class of 1953. After finishing high school, he served his country on active duty in the United States Navy from 1954 to 1958. He sailed on the aircraft carrier USS Bennington during a Pacific tour of Korea and Japan. He received a Good Conduct Medal and National Defense Service Medal. Tony earned an associate degree at Hudson Valley Community College. He married his high school sweetheart, Marilyn Peters on October 11, 1958. Together they had four children who they raised in the house on Glebe Street in Johnstown. Tony began his working life with an engineering firm in Gloversville, and later worked as a field engineer at the telephone company. He worked the last 20 years of his career at the Fulton County Tax Map office. Active in his community, Tony coached Little League baseball and served on the Board of Directors at the Johnstown YMCA. He was a parishioner at Holy Trinity Catholic Church. He was an avid outdoorsman and gardener and was well-known for his ability to revive practically any plant from poor health. Never one to sit still for long, he twice completed a 50-mile charity walk-a-thon for the benefit of Heart Association. He regularly played volleyball and paddle ball at the YMCA, and he always had at least one home improvement project in the works. There is no question that the role that Tony treasured most that of loving, supportive father and husband. He was a quiet, but constant presence at all his children’s sporting events and performances. Later, he and Marilyn often went to great lengths to attend many of their grandchildren’s sports and special events. For the past two years, Tony was well-cared for as a resident of the Wells Nursing Home in Johnstown. Tony is survived by his wife of sixty-three years, Marilyn; his four children, Anthony “Chip”, Mark, Kate, and Monica; and his thirteen grandchildren. He was predeceased by his brother, Catino “Charlie” in March of 2020. Visitation for family and friends will be held on Friday October 15, 2021, from 5:00PM until 7:00 PM at Barter and Donnan Funeral Home, 1 N. Melcher Street, Johnstown. A Mass of Christian Burial will be celebrated on Saturday October 16, 2021, at 12:30 PM at the Holy Trinity Church, 205 Glebe St, Johnstown, NY 12095. Entombment will follow at Mount Carmel Cemetery, Johnstown. Condolences to the family may be made online by visiting our website at www.agcolefuneralhome.com

Anthony (Tony) Thomas Samperi, age 85, of Johnstown, passed away on Tuesday October 12, 2021. Born on January 11, 1936, he was the son of the late Antonio and Ninfa (Pollina) Samperi. Tony grew up on Mason Street in Johnstown, NY. He attended... View Obituary & Service Information

The family of Anthony T. Samperi created this Life Tributes page to make it easy to share your memories.

Send flowers to the Samperi family.