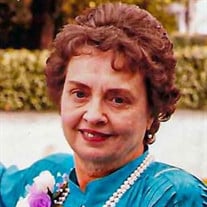 Antonina “Nina” Melita Rindenello, of Niskayuna, passed away peacefully on Thursday April 15, 2021, after a long life of 96 years. She was born in Johnstown NY, the daughter of the late Sebastiano and Concetta Chillemi Melita. Nina worked in the Utica school system for many years, first as a regent’s English teacher and later as a librarian and media specialist. Nina earned her Bachelor’s degree from St. Rose College, a master’s degree from Siena College and a second master’s degree from Syracuse University. Following her retirement, she performed with the Schenectady Light Opera, the Schenectady Civic Players, the Galway Players, and volunteered with the television show, Capital Region today for over 20 years. She also volunteered for many years as a reader for the RISE Radio Reading Service for the Blind and Print Disabled. She was also a member of the American Association of University Women. She is survived by her children, Michele Flint (Kevin) and Gregory Rindenello (Carolyn Cole). Her son, Francis predeceased her in 1991. Nina also leaves behind four grandchildren, David Scirto, Andrea Scirto, Paul Rindenello and Michael Rindenello. The youngest of ten Melita children, Nina is pre-deceased by brothers, Joseph, Charles, Anthony, John, and Philip; and sisters, Maria, Josephine, Frances, and Carmela. She also leaves three great-grandchildren, as well as many Melita, Stack, Rindenello and Shkane nephews and nieces. A mass of Christian burial will be celebrated at 11:00 A.M. on Saturday April 24, 2021, at the Holy Trinity Church, Johnstown. A brief visitation for family and friends will be on Saturday April 24, 2021, prior to the service from 10:00 A.M. until 11:00 A.M. at the church. Interment will be in St. Patrick’s cemetery, Johnstown. The family asks that donations to St. Jude’s Children’s Hospital be considered in lieu of flowers.

Antonina &#8220;Nina&#8221; Melita Rindenello, of Niskayuna, passed away peacefully on Thursday April 15, 2021, after a long life of 96 years. She was born in Johnstown NY, the daughter of the late Sebastiano and Concetta Chillemi Melita. Nina... View Obituary & Service Information

The family of Antonina "Nina" Rindenello created this Life Tributes page to make it easy to share your memories.

Send flowers to the Rindenello family.