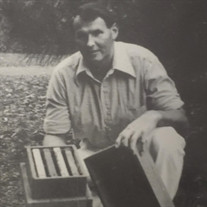 Dr. Carl A. Jurica, age 84, passed away after a brief illness on Tuesday, October 26, 2021, at St. Mary’s Hospital in Amsterdam. Born on August 3, 1937, in Johnstown, NY he was a son to the late Karl and Helen (Ondriska) Jurica. After the passing of Helen, he became the loving son of Anna (Holly) Jurica. Carl attended Johnstown schools until his graduation in 1955. He went on to earn his bachelor's degree in chemistry from Cornell University, his master's degree in education from Central Michigan and his PhD in school administration and entomology from Cornell University. Carl was a lifelong learner, always reading, learning something new and passing that knowledge on to all he knew. While at Cornell, to fill an elective, he took a beekeeping class. As one of his stories that he loved to share, he wanted to use his speed and run away when he found out the class had to go out to the bee yard, but lucky for us he didn’t run away, as it started his true passion in life, being a beekeeper. Carl quickly became an expert beekeeper, selling his queen bees all over the world. In 1985, he wrote and published his book, Practical Queen Production in the North, which is still studied by beekeepers today. He belonged to multiple beekeeping organizations, continued to give many lectures in the tri-state area and was most proud of those he inspired to become beekeeper. Anyone who ever tasted his honey knew they were having the very best! While Carl always wanted his obituary to say that he was “just a beekeeper,” we all know he was much more than that. He started his professional career as a chemist at Korkay in Johnstown and then went on to teach science at Knox Junior High in Johnstown. After all these years, his former students still comment on how much they learned in class, including developing their own photography and making homemade soap. When many people think of Carl, they think of his connection to sports. While at Cornell, Carl was instrumental in starting the men’s volleyball team and continued his love of volleyball throughout his life. He coached the sport for many years and played in many leagues and tournaments, remaining “Mr. Volleyball” well into his 70s. To others, he was the Carl who rode his bicycle everywhere and in any weather. One of his favorite bicycle rides was going up to Granny’s for ice cream. Of course, his love for football cannot be understated, whether it was playing as a Johnstown Sir Bill, as the top running back for his 1954 undefeated high school football team or as one of the original Colonials football players, home games on Knox field under the lights were always his favorite. To others, he was known as an expert gardener, with garlic being the crown jewel of his crop, selling his prized garlic at festivals and farmers markets all over the state. Carl was a self-taught artist. He loved painting pictures that reflected his lifetime memories and favorite things, such as his grandfather’s gas station, swimming in the flume in Hall Creek, pictures of loved ones, his beloved chickens or of the beautiful nature around him. His work was often displayed at a variety of art shows around the area. Always recounting how he started kindergarten not knowing a word of English, Carl was fiercely proud of his Slovak heritage and would continue to speak Slovak with all his Slovak friends and family. Of course, it was always fun when he would pull out his accordion and play a polka song, not to mention all the partners he polka danced with over the years. I’m sure there is many a lady reading this right now who fondly remembers being twirled around the dance floor to the “Beer Barrel Polka” or some other favorite polka song! He always loved talking to one and all- whether at McDonalds, Vintage Cafe, in his garden or on the streets of Johnstown, about everything and anything. If he met you once, you became a friend, and he would always remember and address you by name. Carl had a special way of connecting with people. It is often said that “in your lifetime, if you can count your true friends on one hand then you’re a lucky man.” Carl had that and more, much more. I think we can all agree that it is Carl’s family, neighbors and friends who are truly the lucky ones to have had him in our lives. He is survived by his sister, Mary Ann Chaknis (John); nieces, Jennifer Sweeney (E.J.), Sarah Jurica, Holly Flood (Andrew); nephew, Mark Chaknis; four cats; as well as several other nieces, nephews, and cousins. In addition to his parents, Carl is predeceased by his brother, John A. Jurica. A Funeral Service will be held on Monday November 1, 2021, at 1:00 PM at the A.G. Cole Funeral Home, Inc., 215 E. Main Street, Johnstown. Visitation for family and friends will be held prior to the service at the funeral home from 10:00 AM until 1:00 PM. In lieu of flowers, donations can be made to Kitten Angels of Mayfield, 233 Houseman St., Mayfield, NY 12117 Condolences to the family may be made online by visiting our website at www.agcolefuneralhome.com

The family of Dr. Carl Jurica created this Life Tributes page to make it easy to share your memories.

Send flowers to the Jurica family.