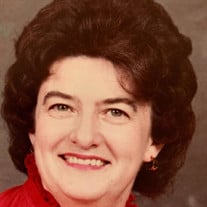 Carol H. Ort, age 82, of Johnstown passed away on Wednesday March 24, 2021 at the Wells Nursing Home, Johnstown. Born on November 25, 1938 in Gloversville, NY she was the daughter of the late Richard Carr and Ellen Sweet Hook. Carol was a graduate of Gloversville High School. She was employed as a bus driver for the Lexington Center until her retirement. Carol was a member of the Northbush United Methodist Church, United Methodist Women, and choir director for over 20 years at the church, Women of the Moose, and a member of the Gloversville VFW Auxiliary. She also sang with the Country Strings band for 20 years. She was united in marriage to Alvin H. Ort on February 12, 1988 until his passing on June 15, 2009. Carol is survived by her children, Kimberly McKeough of Gloversville, Ronald Brown (Tami) of Gloversville, Michael Brown (Sis) of Caroga Lake, James Brown (Sherry) of Broadalbin, David Brown (Jessica) of Florida, Bonnie Brown-Holmes (Milton) of Gloversville; sister, Sharon Gurney of Corinth; brothers, Mark Hook of Corinth, Dean Hook of Tennessee; as well as several grandchildren, great grandchildren, nieces, nephews, and cousins. In addition to her parents and husband, Carol is predeceased by her grandson, Zackery Holmes, a sister, Shirley Beck, and son in law, Jack McKeough. A Funeral Service for family and friends will be on Monday March 29, 2021 at 6:00 PM at A.G. Cole Funeral Home Inc, 215 E. Main Street, Johnstown. Social distancing guidelines must be met, and face masks are required. Spring Interment will be at Northbush Cemetery. In lieu of Flowers, contributions in Carol’s memory may be made to the North Bush United Methodist Church, 1009 N Bush Rd, Caroga Lake, NY 12032. Arrangements have been entrusted to the A.G. Cole Funeral Home, Inc. 215 East Main Street, Johnstown, New York 12095 Condolences to the family may be made online by visiting our website at www.agcolefuneralhome.com.

Carol H. Ort, age 82, of Johnstown passed away on Wednesday March 24, 2021 at the Wells Nursing Home, Johnstown. Born on November 25, 1938 in Gloversville, NY she was the daughter of the late Richard Carr and Ellen Sweet Hook. Carol was a... View Obituary & Service Information

The family of Carol H. Ort created this Life Tributes page to make it easy to share your memories.

Send flowers to the Ort family.