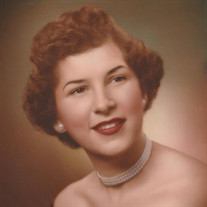 Catherine A. Friello, age 92, of Johnstown passed away on Monday, January 11, 2021 at Nathan Littauer Hospital, Gloversville. She was born on September 10, 1928 in Mechanicville, a daughter of the late Dominick Parente and Christine LaVigne Parente. Mrs. Friello was a graduate of Mechanicville High School. She was employed for many years as a computer programmer at Fulton Montgomery Community College until her retirement. She was of the Catholic faith, a communicant of Holy Trinity Church. She is survived by one son Thomas Friello (Amy) of Johnstown; two daughters Cathy Eleiott (David) of Casa Grande, Arizona and Christine Mylott (Jim) of Johnstown; one sister Mary Baker of Michigan; eight grandchildren Katie, Rebecca, Christopher, Jonathan, Elise, Adele, Dominick and Melissa; eleven great grandchildren Jaxon, Andrew, Anna, Genesis, Ethan, Levi, Adira, Giovanna, Lux, Camden and Easton and several nieces and nephews. Catherine was predeceased by her husband Angelo M. Friello whom she married on June 18, 1955 and whom passed on February 17, 2016. Private services will be conducted at the convenience of her family. Interment will be in the All Saints on the Hudson Cemetery, Mechanicville. Contributions in Catherine’s memory may be made to the Fulton Montgomery Community College Foundation, 2805 State Highway 67, Johnstown, New York 12095 or to the Willing Helpers’ Home for Women, Inc., 226 W. Madison Avenue, Johnstown, New York 12095. Arrangements have been entrusted to the Barter & Donnan Funeral Home, 1 N. Melcher Street, Johnstown. Condolences to the family may be made online by visiting our website at www.agcolefuneralhome.com

Catherine A. Friello, age 92, of Johnstown passed away on Monday, January 11, 2021 at Nathan Littauer Hospital, Gloversville. She was born on September 10, 1928 in Mechanicville, a daughter of the late Dominick Parente and Christine LaVigne... View Obituary & Service Information

The family of Catherine A. Friello created this Life Tributes page to make it easy to share your memories.

Catherine A. Friello, age 92, of Johnstown passed away on Monday,...

Send flowers to the Friello family.