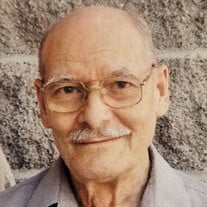 Charles W. “Chuck” Nethaway, age 87, of Johnstown, passed away on Sunday, December 27, 2020 at Capstone Center for Rehabilitation and Nursing, Amsterdam.. He was born on July 8, 1933 in Johnstown, a son of the late Harold Nethaway and Nettie Ortell Nethaway. He was a graduate of Johnstown High School, Cobleskill College and attended Cornell University. Chuck honorably served his country in the U.S. Army Infantry Division as a Sergeant stationed at Fort Drum and Worms, Germany from 1955 to 1957. He was employed at his family’s grocery store, Nethaway’s Market in Johnstown. Mr. Nethaway later worked for Grand Union and Price Chopper as a Meat Cutter until his retirement. Charles was a past master of the St. Patrick’s Lodge and was active in the Eastern Star, Amaranth. He was also a member of the Chamber of Commerce, Johnstown Jaycees and Shriners of North America. Chuck enjoyed carpentry and working outside in his yard on his home. Most of all in his past time, he loved aviation and piloting his Cessna airplane that he would fly often out of the Fulco Airport in Johnstown. Chuck is survived by his two children Dale Nethaway (Terry) and Laurie Nethaway Demagistris, both of Johnstown, one stepson Paul Betz (Frances) of Kentucky, one brother John Nethaway (Kim) of Rome; six grandchildren Frankie Jo Page (Mike), Nicholas Stewart (Kristina), Jessica Myers (Dennis), Jeremy Nethaway, Tyler Demagistris and Evan Demagistris (Stephanie); three step grandchildren Daniell Betz (Charles), Hershel Harper and Casey Harper; eight great grandchildren Alex Nethaway, Ciara Goodemote, Aiden Myers, Connor Stewart, Landen and Liam Nethaway, Emily Rose and Oliver Demagistris; eight step great grandchildren Alen Ball, Izaiah, Dion and Kobe Hill, Addison Young, Deacon Mullins, Abby and Brayden Price. He was predeceased by his first wife Leona Sweeney Nethaway who passed in 1981, second wife Laura B. Nethaway who passed in 2007 and one brother David Nethaway. Graveside services with military honors will be conducted at Evergreen Cemetery, Fonda in the Spring. In lieu of flowers, contributions in Charles’ memory may be made to the Veterans Miracle Center, 10 Interstate Avenue, Albany, New York 12205 or to the James A. Brennan Memorial Humane Society, 437 Nine Mile Tree Road, Gloversville, New York 12078. Arrangements have been entrusted to the A.G. Cole Funeral Home, Inc., 215 E. Main Street, Johnstown. Condolences to the family may be made online by visiting our website at www.agcolefuneralhome.com

The family of Charles W. Nethaway created this Life Tributes page to make it easy to share your memories.

Send flowers to the Nethaway family.