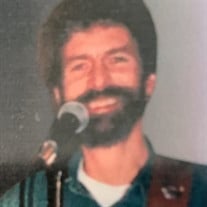 Daniel Joseph Kumpan, of Johnstown, passed away on Thursday, May 23, 2019 at his home. He was 63 years old. Dan will be sorely missed by those who knew and loved him. He was born in Gloversville, June 8, 1955, the son of Robert W. Kumpan and JoAnn Joyce Kumpan. He attended Johnstown schools and lived his entire life in Johnstown. Dan was of many talents. He was a wood craftsman, repaired and refurbished guitars, gave guitar lessons and more. He enjoyed his moped, or small motorcycle, and visiting old and new friends of which there were many. He was also a lover of birds. He especially enjoyed weekend gatherings of relatives and friends at “Frog Hollow”, and the Annual “Frogstock” ensemble of musicians from near and far. Most of all, Dan was music. He was self taught on the guitar and at the age of 11, joined his first band consisting of four talented senior high school students. This band became popular throughout the Capital District and beyond. Through the years, he played with several other popular bands, the most recent being the “Karg Brothers.” Dan was versatile as he played lead and/or bass guitar and vocalized. Dan leaves behind his father, Robert W. and wife Janet, his brothers Thomas R. (Melissa), Timothy P., and sister, Shayna Murry (William), nephews Timothy T. (Christina), Reid Witalis, Nick White, and Timothy III…and cherished family friend, Deborah Cary. Also extended family, Mitchell Jordan (Carly), John Jordan (Kristen), and Julie O’Donnell (John) and their family. He was predeceased by his mother.   Visitation for family and friends will be held on Tuesday, May 28, 2019 from 4:00 P.M. until 7:00 P.M. at the A.G. Cole Funeral Home, Inc., 215 E. Main Street, Johnstown.   A Mass of Christian Burial will be celebrated at 10:00 A.M. on Wednesday, May 29, 2019 at Holy Trinity Church, Glebe Street, Johnstown. Interment will be in Evergreen Cemetery, Fonda immediately following the Mass. In lieu of flowers, contributions in Dan’s memory may be made to the James A. Brennan Memorial Humane Society, 437 Nine Mile Tree Road, Gloversville, New York 12078 or to Mountain Valley Hospice, 108 Steele Avenue, Gloversville, New York 12078.   Condolences to the family may be made online by visiting our website at www.agcolefuneralhome.com

Daniel Joseph Kumpan, of Johnstown, passed away on Thursday, May 23, 2019 at his home. He was 63 years old. Dan will be sorely missed by those who knew and loved him. He was born in Gloversville, June 8, 1955, the son of Robert W. Kumpan and... View Obituary & Service Information

The family of Daniel Joseph Kumpan created this Life Tributes page to make it easy to share your memories.

Daniel Joseph Kumpan, of Johnstown, passed away on Thursday,...

Send flowers to the Kumpan family.