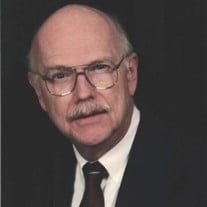 David John Kovarovic, age 80, of Rensselaer, NY passed away on Friday May 21, 2021 in Midwest City, OK. Born on January 6, 1941 in Albany, NY he was the son of the late John S. and Elizabeth K. Kovarovic. He graduated from Vincentian Institute High School and Siena College and received two subsequent degrees, Master of Arts (History) and Doctor of Philosophy (English History – Tudor and Stuart periods) from New York University. David taught history at Dumbarton College of the Holy Cross (District of Columbia) and Maryville College (TN), before moving to Dodge City, KS where he taught history at St. Mary of the Plains College until its closure in 1992. He continued his teaching career at Northwestern Oklahoma State University (NWOSU) in Alva, OK, until his retirement in 2003. While at NWOSU, he wrote several scholarly articles about European history and also produced reviews of books on historical topics. David was also selected to participate in several scholarly multidisciplinary summer research programs throughout the country through grants from the National Endowment for the Humanities. David’s passion for helping others learn extended beyond the university classroom to younger generations. While attending graduate school in New York City, he worked with preschool children in a Head Start program and later regularly served as a mentor to students at Lincoln Elementary School in Alva during his retirement years. Above all, he enjoyed visiting, conversing on the phone, or video-chatting with his nieces, grandchildren, grandnieces and grandnephew, with whom he would read and tell about the history of places throughout the USA and the globe. He is survived by his son, James Kovarovic (Angela), son with his former spouse, Barbara Lundin of Dodge City, KS, and his three grandchildren, Ryan, Sean, and Avery of Dover, DE; and his sister, Suzanne Kovarovic Bomar (Lamar) of Springfield, VA. He also leaves nieces Dr. Stephanie Bomar of Centreville, VA, Jennifer Brose of Milford, NY (grandnieces Charlotte, Lark and grandnephew Peter) and Andrea Bomar (Woodbridge, VA), and many special cousins. David was pre-deceased by his parents and two infant sons, Michael David and Stephen John Kovarovic. He will be deeply missed by his family, friends, and all of those who loved him. A Rosary prayer service will be held on Saturday June 5, 2021 at 8:00 AM at Barter and Donnan Funeral Home, 1 N. Melcher Street, Johnstown NY. Visitation for family and friends will be held at Holy Trinity Church, 205 Glebe Street, Johnstown, NY on Saturday June 5, 2021 from 9:30 AM until 10:00 AM. A Mass of Christian Burial will immediately follow which will be live-streamed on Facebook at https://www.facebook.com/holytrinityjohnstown. Interment will be at St Anthony’s Cemetery, Johnstown. David was an active parishioner of Sacred Heart Catholic Church in Alva for more than 25 years. In lieu of flowers, the family requests that donations be made to Sacred Heart Catholic Church at 627 12th St., Alva, OK 73717 in David’s name. Condolences to the family may be made online by visiting our website at www.agcolefuneralhome.com

David John Kovarovic, age 80, of Rensselaer, NY passed away on Friday May 21, 2021 in Midwest City, OK. Born on January 6, 1941 in Albany, NY he was the son of the late John S. and Elizabeth K. Kovarovic. He graduated from Vincentian Institute... View Obituary & Service Information

The family of David J. Kovarovic created this Life Tributes page to make it easy to share your memories.

David John Kovarovic, age 80, of Rensselaer, NY passed away on...

Send flowers to the Kovarovic family.