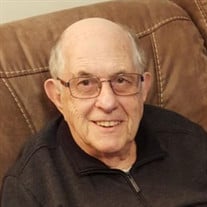 David Wilmer Peck, age 85, of Gloversville, New York passed away on Saturday, July 18, 2020 at home following a one year decline due to medical issues. His loving wife of 48 years, Nancy Swart Peck, was at his side. He was born on July 6, 1935 in Segal, Pennsylvania, a son of the late Frank Peck and Irene Ware Peck. Eight living children will mourn the loss of their father: Susan Orcutt (Larry) of Gloversville, Pamela Blanchard (Raymond) of Georgetown, Maine, Jennifer Garren of Gloversville, Michael Peck (Ying) of Thailand, Allison Wehri (Keith) of Yuba City, California, Kelly Bond (Mike) of Fultonville, Michelle Hesslink (Steve) of Cleveland, Tennessee and Matthew Peck of Albion, Maine. He is also survived by fifteen grandchildren and twenty great-grandchildren and one brother James Peck of Beverly, West Virginia. His oldest son, David Peck died of Leukemia in October of 1996 and his infant son Christopher Peck died in September of 1968. David worked at the Johnstown Knitting Mill in the early 50s and then became a Truck Driver for many years working for Dorn’s in Albany. He relocated to Central Maine where he helped build Destroyers for the U.S. Navy at Bath Iron Works until he retired. David and Nancy lived 22 years in Woolrich, Maine. In 2000, he and Nancy returned to Fulton County. He often said that he was the luckiest man alive for having met the love of his life, Nancy, and that each and every child made him so proud, he felt he would burst at the seams. He loved his family above all else and made time for everyone. When one of his children or grandchildren or even great-grandchildren did well, he would tell everyone about their accomplishments and successes. His smile would beam for days. He still had friends that he made in the 1950s. He had a lifelong interest in history and became quite the WWI & WWII buff. He dearly loved animals but especially horses and dogs. He had Draft Horses that he trained for many years. There probably wasn’t a time in his life that he didn’t have a dog. His last one, Shonon, recently died in June and was his constant companion for the last ten years. Funeral services will be conducted at 4:00 p.m. on Tuesday, July 21, 2020 at the A.G. Cole Funeral Home, 215 E. Main St., Johnstown with his grandson Chaplain Kevin Orcutt officiating. Visitation for family and friends will be prior to the funeral service on Tuesday, July 21, 2020 from 2:00 p.m. to 4:00 p.m. at the funeral home. In lieu of flowers, contributions in David’s memory may be made to St. Jude Children’s Research Hospital, 501 St. Jude Place, Memphis, Tennessee 38105. Condolences to the family may be made online by visiting our website at www.agcolefuneralhome.com

David Wilmer Peck, age 85, of Gloversville, New York passed away on Saturday, July 18, 2020 at home following a one year decline due to medical issues. His loving wife of 48 years, Nancy Swart Peck, was at his side. He was born on July 6, 1935... View Obituary & Service Information

The family of David Wilmer Peck created this Life Tributes page to make it easy to share your memories.

Send flowers to the Peck family.