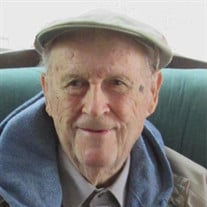 David Wemple Sponenberg, 98, a lifelong Johnstown resident, died peacefully on August 30, 2020. Born July 25, 1922, he was the son of Barney Jay and Minnie Degnan Sponenberg and was a graduate of the Johnstown High School class of 1941. He was a founder and former president of Silk Screen Art, Inc. in Johnstown, retiring in 1991. A World War II veteran, he served in the United States Army from November 1942 until November 1945 as a corporal in Section 4, Battery B, 359th Field Artillery Battalion of the 95th Infantry Division. Throughout the war, he participated in the campaigns in Northern France, the Rhineland, and Central Europe, serving under allied commanders George S. Patton and Bernard Montgomery. After Germany’s surrender, Mr. Sponenberg worked in displaced persons’ camps, helping war refugees and holocaust survivors to reconnect with their families and homes. He was known for his gentleness, compassion, and integrity. He was of the Methodist faith and also spent many years attending Saint Patrick’s Catholic Church in Johnstown (now Holy Trinity) with family. Mr. Sponenberg was an avid golfer and photographer and enjoyed summers at his family camp in the Adirondacks. He was also a gifted artist, painting in oils and watercolors, and was often an exhibitor in the annual Fulton County Art Show at the Gloversville First Congregational Church. His many works of art are cherished by members of his family. Mr. Sponenberg was often called upon during World War II to paint ‘nose art’ on artillery pieces, tanks, and trucks. His own 105 howitzer was named Sweet Eloise and adorned with a painting of his future bride. On July 17, 1945, he was married to Eloise A. Hedden, who predeceased him in 2019. Together they traveled to over 120 countries. The Sponenbergs loved gathering with family, and, in July 2018, celebrated their 73rd anniversary with their children, grandchildren, and great grandchildren. Mr. Sponenberg was the father of four children, all of whom survive: David Peter Sponenberg and wife Judith of Fonda, Jan S. Prestopnik and husband Richard of Fort Johnson, Amy Nadine Sponenberg of Johnstown, and Guy Barent Sponenberg and wife Kathleen of Gloversville. He is survived by nine grandchildren, David, Rebecca, Jennifer, Barney, Nathan, Emily, Adam, Natalie, and Luke, and six great grandchildren, Jackson, Sarah, Abigail, Chloe, Douglas, and David, as well as one brother, Robert Edwin Sponenberg of Leominster, Massachusetts, and several nieces, nephews, and cousins. Private services will be conducted at the convenience of the family, and interment will take place at Evergreen Cemetery in Fonda. In lieu of flowers, those wishing to remember Mr. Sponenberg in a special way are invited to make a donation to the Alzheimer’s Association, 225 N. Michigan Ave., Floor 17, Chicago, Illinois 60601 (alz.org). Arrangements have been entrusted to the Barter & Donnan Funeral Home, 1 N. Melcher Street, Johnstown. Condolences to the family may be made online by visiting our website at www.barterdonnan.com

David Wemple Sponenberg, 98, a lifelong Johnstown resident, died peacefully on August 30, 2020. Born July 25, 1922, he was the son of Barney Jay and Minnie Degnan Sponenberg and was a graduate of the Johnstown High School class of 1941. He was... View Obituary & Service Information

The family of David Wemple Sponenberg created this Life Tributes page to make it easy to share your memories.

Send flowers to the Sponenberg family.