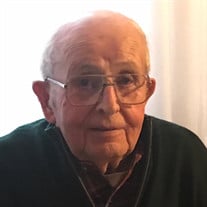 Delbert J. Bradt, age 93, of Meco, passed away peacefully on Tuesday, May 28, 2019, at his residence surrounded by his loving family. He was born at home on March 16, 1926, in Meco, a son of the late Edward and Carrie Wille Bradt and lived in Meco all his life. Delbert was a Class of 1943 graduate of Gloversville High School and proudly served his country in the U.S. Navy during World War II from June 6, 1944, to June 16, 1946. He served on the U.S.S. Butte APA #68 and they took the troops ashore on April 1, 1945, at Okinawa. Delbert earned the American Theater Medal, Victory Medal, Asiatic Pacific Medal 1 Star, and the Philippine Liberation Ribbon. He returned home on a Sunday and he met his loving wife, Kathryn Gray, at Garoga the following Saturday night. It was love at first sight and they were married July 27, 1947. They enjoyed 68 years of married life. They enjoyed spending weeknds at Saranac Lake and watching the Hummingbirds on their back porch. They loved their three duaghters, Sandy, Debbie, and Joyce, and cherished the time they spent with their grandchildren and great grandchildren. His loving wife of 68 years passed away on March 31, 2015, 11 days after her 87th birthday. We should all be so lucky to have the same kind of love they shared for each other. Delbert adored Kathryn and he missed her every day since she was taken from him. He was employed by the Town of Johnstown Highway Department for 43 years, the last twelve years as Superintendent of Highways until his retirement. After retirement in 1989, he worked part-time in the winter for the Town when it snowed as a snow plower. Delbert continued to work at his part time business until the age of 80 doing small jobs locally. He is a charter member of the Meco Volunteer Fire Department and was the last surviving charter member. Delbert was also a member of the Broadalbin VFW. Delbert was predeceased by his brother, Orville Bradt, daughter, Debbie Town, who passed away on October 14, 2011, and his nephew John Bradt. He is survived by his two daughters Sandy Hurlbert and her husband Robert and Joyce Robbins and her husband Rob; six grandchildren; Kelly Harper, Bobby Hurlbert, Darcie (Lorne) Barr, Christine (David) Franco, Jessica Van Nostrand, Ryan (Heather) Robbins; twelve great grandchildren Alexandra and Madison Franco, Harrison and Grace Harper, Shane and Logan Van Nostrand, Mila Becker, Arkady, Ruah and Stevie Barr, and Drew and Smith Robbins; his brother, Ralph Bradt, and several nieces, nephews and cousins. Funeral services will be conducted at 10:00 A.M. on Monday, June 3, 2019, at the A.G. Cole Funeral Home, Inc., 215 E. Main Street, Johnstown, with Rev. Bonnie Orth officiating. Visitation for family and friends will be on Sunday, June 2, 2019, from 3:00 P.M. to 6:00 P.M. at the funeral home. Interment with military honors will be in Fern Dale Cemetery, Johnstown immediately following the funeral service. Contributions in Delbert’s memory may be made to the Meco Volunteer Fire Department, 1600 State Highway, Route 29A, Gloversville, New York 12078. Delbert wanted to thank his neighbor Alfred Pettit and his niece and nephew, Linda and Bob Bronk who looked out for him and helped him on a daily basis. Condolences to the family may be made online by visiting our website at www.agcolefuneralhome.com

Delbert J. Bradt, age 93, of Meco, passed away peacefully on Tuesday, May 28, 2019, at his residence surrounded by his loving family. He was born at home on March 16, 1926, in Meco, a son of the late Edward and Carrie Wille Bradt and lived... View Obituary & Service Information

The family of Delbert J. Bradt created this Life Tributes page to make it easy to share your memories.

Send flowers to the Bradt family.