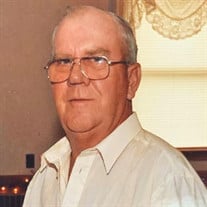 Douglas Fairbanks Lawrence, Jr., age 73, of Johnstown, was called home to our Lord on Monday, July 19, 2021. Born February 19, 1948, in Norwich, NY, Doug grew up in Norwich with his parents, Douglas F. Lawrence Sr. and Beatrice Lawrence. He graduated from Norwich High School in 1967 and married his High School sweetheart, Faye Ann Wilcox, July 15, 1967. Douglas served in the U.S. Navy from 1967-1969, serving on the USS Prowler, serving in the Mediterranean and Norfolk, VA. He worked at the Great American in Norwich for several years and helped grow Christmas Trees on the Wilcox Tree Plantation. In 1976, Doug and Faye Ann moved to Johnstown, NY, where Doug was employed by Laral Management of Maple Knoll Apts. Doug was known for meticulously maintaining the grounds and property of the apartment complex for 37 years until his retirement in 2013. Doug and Faye enjoyed making Christmas Wreaths for over two decades, where they made 1000s of wreaths each year for the Boy Scouts, Soroptomos and other local organizations for fundraising. They loved to travel to St. Maarten every year together and found much joy in playing bingo. In Doug’s free time, he enjoyed bowling with the Finx League for over 30 years, (bowling three-300 games) and was an avid deer hunter, while raising beagles. Doug belonged to the Royal Order of the Moose #1185, in Johnstown for more than 20 years. Douglas was predeceased by his loving wife of 53 years, Faye Ann. He is survived by their three children, Bruce Lawrence of Johnstown; Tammy (Michael) Stoutner of Broadalbin; and Robyn (David) Huckans of Broadalbin, 11 grandchildren and 12 great-grandchildren; his two sisters, Connie Pounds and Sherri Bennett and several nieces and nephews. He was predeceased by his parents, Douglas F. and Beatrice Lawrence Sr., of Norwich, NY, two sisters, Beverly Anderson and Betty Neimier, and his brother, Thomas Lawrence. A private burial service for Douglas and Faye Ann will be held at Saratoga National Cemetery. Arrangements have been entrusted to the A.G. Cole Funeral Home, 215 E. Main Street, Johnstown, NY. Condolences to the family may be made online by visiting the family’s page at www.agcolefuneralhome.com.

The family of Douglas F. Lawrence Jr. created this Life Tributes page to make it easy to share your memories.

Send flowers to the Lawrence family.