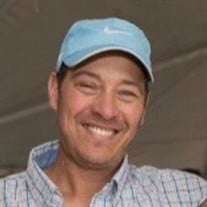 Douglas Victor Sammons, age 50, of Stone Arabia, passed away on Sunday, April 19, 2020 at his residence with his wife and three kids by his side. He was born in Amsterdam on April 14, 1970, the son of the late Clyde Victor Sammons and Sheila Kasson Sammons of Sammonsville, who survives. Victor attended Johnstown High School and graduated from the New York Military Academy. He received his Bachelors Degree from SUNY Maritime and sailed for several years as a merchant mariner for Alaska Tanker Co. and Seabulk. After resigning, Victor resumed his work as owner and operator of Duncraven Farms Dairy where he fulfilled his dream of processing and delivering glass bottled milk. Victor never lost his passion for the sea and later continued his sailing career with Kirby and Schuyler Lines Navigation Co. Victor was a member of the American Maritime Officer Union, U.S. Rowing Association and the National Rifle Association. He enjoyed being outdoors hiking, skiing, hunting, rowing and spending time with his family and friends. In addition to his mother, Victor is survived by his wife Amy F. Bardin Sammons who he married on June 25, 1995; three children Simeon Sammons, Haleigh Sammons and Emory Sammons, all of Stone Arabia; two sisters Lauren Lozier (Peter) of Canada Lake and Betsy Sammons of Colorado Springs, CO; two nephews Reece Eddy and Warren Eddy and one niece Ella Eddy. Victor was an avid rower and passed his passion for the sport onto his children. In lieu of flowers, please make contributions to the Saratoga Rowing Association’s Rowers Assistance Program to help provide that opportunity to more children. Donations can be made at https://club.saratogarowing.com/rowers-assistance-program/ Additionally, contributions can also be sent in honor of Victor Sammons to Sarasota Crew in Florida. Donations can be sent to 343 Palmetto Ave, Osprey, FL 34229. Private services will be conducted at the convenience of the family. Interment will be in Evergreen Cemetery, Fonda. Arrangements have been entrusted to the Barter & Donnan Funeral Home, 1 N. Melcher Street, Johnstown. Condolences to the family may be made online by visiting our website at www.barterdonnan.com

Douglas Victor Sammons, age 50, of Stone Arabia, passed away on Sunday, April 19, 2020 at his residence with his wife and three kids by his side. He was born in Amsterdam on April 14, 1970, the son of the late Clyde Victor Sammons and Sheila... View Obituary & Service Information

The family of Douglas Victor Sammons created this Life Tributes page to make it easy to share your memories.

Send flowers to the Sammons family.