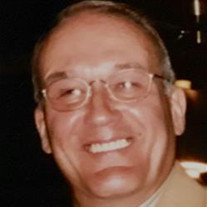 Edward Karg Hornidge, age 80, a lifelong area resident of Johnstown, passed away Sunday July 7, 2019 at home. He was the son of the late George and Elizabeth Karg Hornidge. Edward was a 1956 graduate of Johnstown High School, attended Syracuse University and Spencer Business College, in Schenectady. Ed was a member of the St. Patrick’s Church where he served on the Parish council and also served a term as president, he was also a member of the senior Choir. He served on the board of the Johnstown YMCA board of directors and was vice-president for two terms. He was also chairman of the membership drive for 10 years and was president of the YMCA parents club. Ed was a very accomplished bridge player and he was a lifetime member of the Colonial Bridge League and the American Contract Bridge League where he achieved the rank of a gold life master. He was one of the fiercest competitors to ever play a card for Johnstown but with a heart of gold. Survivors include his son William (Tanya Stoller) Hornidge; granddaughter Alexis Hornidge; grandsons Tyler David (Helaina) Hornidge and Alec Matthew Hornidge; Sister-in-law Maureen and Jack Papa and Maryann and Art Stock; he was uncle Ed to Jennifer, Tom, Charlie, Eileen, Matt, Maureen, Amy, Joey, Frank, and Gina. In addition to his parents he was predeceased by his wife Joanne Brennan Hornidge whom he married on May 21, 1966 and who passed away on July 29, 1989; his son David Hornidge who passed away on December 13, 2016 and his dear niece Amy Stock. A memorial mass will be conducted on Friday, July 12, 2019 at 11:00 AM at the Holy Trinity Church, Glebe Street, Johnstown. Visitation for family and friends will be on Friday one hour prior to the service from 10:00 AM until 11:00 AM at the church. Interment will be in St. Patrick’s Cemetery, Johnstown. Memorial contributions in his memory may be made to the David E. Hornidge Memorial Scholarship Fund, P.O. Box 11, Johnstown, New York, 12095. Arrangements have been entrusted to the Barter & Donnan Funeral Home, 1. N. Melcher Street, Johnstown, New York 12095. Condolences may be made to the family at www.barterdonnan.com

Edward Karg Hornidge, age 80, a lifelong area resident of Johnstown, passed away Sunday July 7, 2019 at home. He was the son of the late George and Elizabeth Karg Hornidge. Edward was a 1956 graduate of Johnstown High School, attended Syracuse... View Obituary & Service Information

The family of Edward Karg Hornidge created this Life Tributes page to make it easy to share your memories.

Send flowers to the Hornidge family.