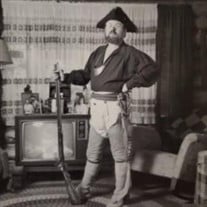 Edward E. White, age 74, passed away on Wednesday October 6, 2021. Born on March 8, 1947, he was the son of the late Edward R. and Ruth B. (Briggs) White, of Johnstown NY. He was a graduate of Johnstown High School and received his Associates Degree in Forestry from SUNY Morrisville. Ed had a great love for the outdoors. He enjoyed many outdoor activities, like fishing, canoeing, hunting and camping with his family. Ed was a long time member of the Caroga Fish and Game Club, enjoying many Chicken BBQs with family and friends. Building his log cabin in the Adirondack Mountains (Caroga Lake) was an accomplishment he was very proud of. Once highlighted in (a published book) and quoted to have said “Live Simply, that is my theory on life.” He had hoped to clear and homestead the land and live as the settlers did before him. His love for the lands history found him becoming highly active and a long time participant of many re-enactments of the French and Indian Wars that built the area he lived in. Edward resided at the family home in Johnstown NY to care for his mother until her passing in 2012 then moving to Trackside Homes 2018 before falling ill and on October 6, 2021 at the age of 74, the Lord called him to his final resting place. In addition to his parents, Edward was predeceased by his parents his grandparents, Charles and Julia S. White and Harold and Margaret Lenz Briggs. He leaves behind his sister, Kathryn (James) Nocito of Florida; his son, David A. (Roberta) Billa of Limestone, TN; daughter, Kimberly (John) Harris of Wautoma, WI; grandchildren, Andrew M. Billa, Nicole M. Passananti, David E. Billa, Andrew A. Billa; great grandchildren, Elaina Passananti., Aidyn Passananti; as well as his nephew and niece, Nicholas A. Nocito and Julie A. Nocito; and several great nephews and nieces. A Graveside Service is planned for family and friends at the Ferndale Cemetery, Johnstown NY at the convenience of his family. Arrangements have been entrusted to the A.G. Cole Funeral Home Inc., 215 E. Main Street, Johnstown NY 12095. Condolences to the family may be made online by visiting our website at www.agcolefuneralhome.com

Edward E. White, age 74, passed away on Wednesday October 6, 2021. Born on March 8, 1947, he was the son of the late Edward R. and Ruth B. (Briggs) White, of Johnstown NY. He was a graduate of Johnstown High School and received his Associates... View Obituary & Service Information

The family of Edward E. White created this Life Tributes page to make it easy to share your memories.

Send flowers to the White family.