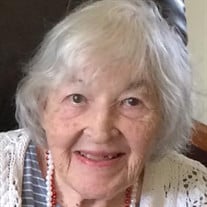 Eloise Hedden Sponenberg, 94, a lifelong Johnstown resident, died peacefully on May 1, 2019. Born June 15, 1924, she was the daughter of Peter John Whitfield Hedden and Prosperine Bazerque Hedden and was a graduate of Saint Patrick’s Parochial School and the Johnstown High School class of 1941. She graduated salutatorian of the class of 1972 of Fulton-Montgomery Community College and was a member of Phi Theta Kappa National Scholastic Honor Society. She received a Baccalaureate degree from Empire State College, did her graduate work at Elmira College and SUNY Oneonta, and taught second grade at Jansen Avenue School in Johnstown, retiring in 1986. Mrs. Sponenberg, a lifelong learner and teacher, loved to experience and appreciated all that the world offers. Mrs. Sponenberg was a member of Saint Patrick’s Church in Johnstown (now Holy Trinity), was a member of its Rosary Society, taught religious education classes, and was active in parish life. She served as president of the Johnstown Central Council PTA and the Warren Street School PTA and was an Honorary Lifetime Member of the New York State PTA. She played many roles in Johnstown’s Colonial Little Theatre in the 1960’s and served as its president, was a volunteer at Lexington Center and at Wells House, where she held offices in its Auxiliary, and was a member of the Shirley J. Luck Senior Center in Johnstown and the New York State Retired Teachers Association. On July 17, 1945, she was married to David Wemple Sponenberg, who resides in Johnstown. Together, they traveled to over 120 countries. The Sponenbergs loved gathering with family, and, in July 2018, celebrated their 73rd anniversary with their children, grandchildren, and great grandchildren. Mrs. Sponenberg was the mother of four children, all of whom survive: David Peter Sponenberg and wife Judith of Fonda, Jan S. Prestopnik and husband Richard of Fort Johnson, Amy Nadine Sponenberg of Johnstown, and Guy Barent Sponenberg and wife Kathleen of Gloversville. She is survived by nine grandchildren, David, Rebecca, Jennifer, Barney, Nathan, Emily, Adam, Natalie, and Luke, and four great grandchildren, Sarah, Abigail, Chloe, and Douglas, as well as several nieces and nephews. She was predeceased by her parents and two sisters, Mrs. Aline Prohaska of Gloversville and Mrs. Mary Peck of Northville. A Mass of Christian Burial will be held at Holy Trinity Parish, 205 Glebe Street, Johnstown at 11 a.m. on Thursday, May 9th. Interment will follow at Evergreen Cemetery (Sand Flats Cemetery) in Fonda. Respects may be paid to the family prior to Mass at 10 a.m. at the church. Those wishing to remember Mrs. Sponenberg in a special way are invited to make a donation to the American Brain Tumor Association at 8550 W. Bryn Mawr Ave., Suite 550, Chicago, Illinois 60631 (www.abta.org). Arrangements have been entrusted to the Barter & Donnan Funeral Home, 1 N. Melcher Street, Johnstown. Condolences to the family may be made online by visiting the Barter & Donnan Funeral Home website at www.barterdonnan.com

Eloise Hedden Sponenberg, 94, a lifelong Johnstown resident, died peacefully on May 1, 2019. Born June 15, 1924, she was the daughter of Peter John Whitfield Hedden and Prosperine Bazerque Hedden and was a graduate of Saint Patrick&#8217;s Parochial... View Obituary & Service Information

The family of Eloise Sponenberg created this Life Tributes page to make it easy to share your memories.

Send flowers to the Sponenberg family.