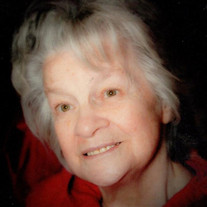 Emma Mae Brayton, age 90, formerly of Pineview Commons in Johnstown until her illness, went to be the Lord on Saturday, March 30, 2019 at the Nathan Littauer Hospital Nursing Home, Gloversville. She was born on January 9, 1929 in Johnstown, a daughter of the late William Phillips and Zelda Caldwell Phillips. In Emma’s early years, she was employed at the former Johnstown Knitting Mill and later as a housekeeper for several local businesses. She then became a proud homemaker to her loving family. Mrs. Brayton was of the Baptist faith and loved her Church. She was a voracious reader who enjoyed spending time with her family and her canine and feline companions. Emma is survived by her husband William Brayton, one son John Borst (Judith Ruzicka) of Mayfield; three daughters Deborah Jackson of Gloversville, Yvonne Baird (Ronald) of Mayfield and Linda Elwood (Pete) of St. Johnsville, one sister Louise Broat (Robert) of Bradenton, Florida; sixteen grandchildren; thirty-eight great grandchildren; three great great grandchildren; several nieces, nephews, cousins and her Yorkie Terrier Vinny. She was predeceased by her two sons Howard Borst and Wayne Borst; four siblings Harold Phillips, Leonard Phillips, Oliver Phillips and Alberta Phillips, great great grandson Oliver Lenard Plummer, niece Laurie Priest and nephew Larry Broat. Funeral services will be conducted at 1:00 P.M. on Wednesday, April 3, 2019, at the A.G. Cole Funeral Home, Inc., 215 E. Main Street, Johnstown with Pastor William Emmons officiating. Visitation for family and friends will be prior to the service on Wednesday, April 3 from 11:00 A.M. to 1:00 P.M. at the funeral home. Interment will be in Fern Dale Cemetery, Johnstown, immediately following the funeral service. Contributions in Emma’s memory may be made to Life Christian Center Church, 1680 State Highway 67, Johnstown, New York 12095 or to the James A. Brennan Humane Society, 437 Nine Mile Tree Road, Gloversville, New York 12078. Emma’s family would like to thank all the caregivers who provided her with comfort and compassion. Condolences to the family may be made online by visiting our website at www.agcolefuneralhome.com

Emma Mae Brayton, age 90, formerly of Pineview Commons in Johnstown until her illness, went to be the Lord on Saturday, March 30, 2019 at the Nathan Littauer Hospital Nursing Home, Gloversville. She was born on January 9, 1929 in Johnstown,... View Obituary & Service Information

The family of Emma Mae Brayton created this Life Tributes page to make it easy to share your memories.

Send flowers to the Brayton family.