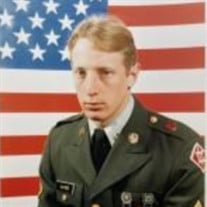 Eric “Smokey” M. Hayner, passed away peacefully on March 13, 2022, with his beloved wife, oldest son, and adored grandchildren by his side. He was born December 13, 1960 to Harry and Cora Hayner. He married the love of his life, Teresa (Crankshaw) Hayner on January 7, 1988. Together they had three children Joseph, Aaron (Heather), and Brendon (Alicia) Hayner. Along with their children, they were blessed with four grandchildren, Catherine, Joseph, Charisma, and Angelynn. In 1980 Smokey enlisted in the United States Army. After serving for four years, he built a home in Caroga Lake and was employed for more than 20 years at H&P Motors. Eric loved raising his family in Caroga Lake, where he grew up. He volunteered for many years at the Caroga Lake Fire Department where he served briefly as President and Treasurer. Smokey will be remembered for his sense of humor and willingness to help others. Often putting others’ needs before his own. He enjoyed dressing in his “tactile gear”, camo shorts with just the right amount of pockets, handing out toothpicks, carrying his electric fly swatter, and gathering at what became known as the “fire pit” with his brothers, Jay, David, Mark, Glenn, Brian, and their families. Friends and neighbors often stopped by for evening fire chats, playing horseshoes, and barbecues. Smokey’s favorite way to spend his time was with his wife and boys or any other activity that got him outdoors, whether it was on family vacation, skiing, hiking the Adirondacks, or his seasonal yard work. Smokey is predeceased by his brother, Douglas and beloved father, Judge Harry Hayner. To honor Smokey’s life of service to our country, his final resting place will be at the Gerald B.H. Solomon Saratoga National Cemetery, in the peaceful village of Schuylerville, NY. Arrangements have been entrusted to the A.G. Cole Funeral Home, 215 E. Main Street, Johnstown, NY. Condolences to the family may be made online by visiting our website at www.agcolefuneralhome.com

The family of Eric "Smokey" M. Hayner created this Life Tributes page to make it easy to share your memories.

Send flowers to the Hayner family.