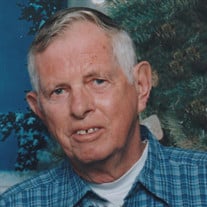 Ernest L. “Ernie” Blanchard, age 86, of Johnstown, passed away peacefully on Tuesday, January 26, 2021 with his son and daughter at his side, in the home he built in the 1950’s. He was quickly called to heaven by his beautiful bride of 67 years, Marion, whom recently passed away on January 15, 2021. He was born on March 31, 1934 in Gloversville to the late John Blanchard and Flora Swart Blanchard. Early on, Ernie was employed by the NYS railroad system. Later becoming employed by local tanneries as a leather worker, he finally settled at the Leavitt-Berner Tanning Corp, where he eventually retired. He was a volunteer firefighter at Sir William Johnson Volunteer Fire Department for many years and took great pride in owning his own lawnmower sales & repair shop. Ernie was a known “flirt” and always made people laugh. He enjoyed camping, playing Pitch and Scat during weekly card nights, spending hours repairing lawn mowers, was a Harley enthusiast-owning several motorcycles and enjoyed long rides with Marion and their friends. He was also a lover of all things Ford and John Deere. Ernie and Marion could easily be found sipping coffee and making friends at Stewart’s or McDonald’s (you could always spot his Ford truck). In his earlier days, he enjoyed snowmobiling and hanging out at the Ephratah or Pine Lake dance halls with Marion, square dancing or doing the Polka! Ernie is survived by three children Roger Blanchard, Robin Winchell (Kenny Felthousen) and Paul Blanchard; two grandchildren Erik Winchell (Lynda) and Lisa Westerling (Stephen); and two great granddaughters whom he absolutely adored, Madalyn and Carly Winchell. He is also survived by two brothers Robert (Terry) Blanchard and John (Nancy) Blanchard; and several nieces, nephews and friends. In addition to his parents and loving wife whom he married on June 28, 1953, Ernie was predeceased by his grandson Roger William “RW” Blanchard, three brothers and their wives Donald (Beatrice) Blanchard, Kenny (Carol) Blanchard and Melvin Blanchard; and several other family members. Despite utter heartbreak, the family is at peace knowing Ernie and Marion are together once again, continuing their love story and dancing in the sky. In keeping with his wishes, there will be no calling hours or funeral services. A celebration of life will be held at a later date honoring this sweet couple. In Lieu of flowers, contributions in Ernie’s memory may be made to Sir William Johnson Volunteer Fire Department or Mountain Valley Hospice. Arrangements have been entrusted to the A.G. Cole Funeral Home, Inc. 215 East Main Street, Johnstown, New York 12095. Condolences to the family may be made online by visiting our website at www.agcolefuneralhome.com

The family of Ernest L. Blanchard created this Life Tributes page to make it easy to share your memories.

Send flowers to the Blanchard family.