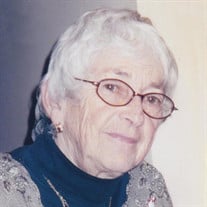 Esther C. Coombs, age 94, of Johnstown, passed away on Saturday, April 25, 2020 at Nathan Littauer Hospital Nursing Home, Gloversville. She was born on January 22, 1926 in the Town of Palatine, a daughter of the late Herman Saltsman and Nettie Durham Saltsman. Esther was employed for many years at Argersinger’s Poultry Farm in Broadalbin. She later worked as a Caretaker at the Saratoga Race Track. Mrs. Coombs was a member of the Johnstown Eagles and the Johnstown Moose. She and her late husband Frank enjoyed traveling and playing in Horseshoe Pitching competitions. Esther also enjoyed taking walks, playing shuffleboard and Bowling. Mrs. Coombs was inducted into the Bowling Hall of Fame. She loved gardening and especially took pleasure in picking dandelions out of her lawn. She is survived by one daughter Linda Kearns of Broadalbin; two granddaughters Jolisa Pelosi (Joe Licciardi) of Johnstown and Shana Pelosi (Les McDonald) of Fort Lauderdale, Florida, one great grandson Adryan Pelosi of Ithaca, her special friend Greta and several nieces, nephews and cousins. Esther was predeceased by her first husband Cecil Hayes, second husband Cecil Frank Coombs whom she married on June 2, 1970 and whom passed on February 21, 1997 and two siblings Manley Saltsman and Ruth Frederick. Memorial services will be conducted at 11:00 A.M. on Thursday, October 15, 2020 at the A.G. Cole Funeral Home, Inc., 215 E. Main Street, Johnstown with Rev. Dr. R.W. Williams officiating. Niche inurnment will be at 11:30 A.M. on Friday, October 16, 2020 at the Gerald B.H. Solomon Saratoga National Cemetery, Schuylerville, New York. Contributions in Esther’s memory may be made to the Johnstown Moose Family Center, 109 S. Comrie Avenue, Johnstown, New York 12095. Condolences to the family may be made online by visiting our website at www.agcolefuneralhome.com

Esther C. Coombs, age 94, of Johnstown, passed away on Saturday, April 25, 2020 at Nathan Littauer Hospital Nursing Home, Gloversville. She was born on January 22, 1926 in the Town of Palatine, a daughter of the late Herman Saltsman and Nettie... View Obituary & Service Information

The family of Esther C. Coombs created this Life Tributes page to make it easy to share your memories.

Esther C. Coombs, age 94, of Johnstown, passed away on Saturday,...

Send flowers to the Coombs family.