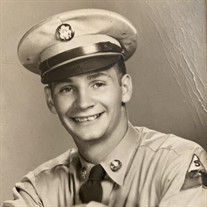 Floyd S. King, Jr., age 89, of Johnstown, passed away on Monday, June 22, 2020 at Wells Nursing Home. He was born in Caroga Lake on April 18, 1931, a son of the late Floyd S. King, Sr. and Florence Lane King. Floyd honorably served his country in the U.S. Army from 1951 to 1953 as a Sergeant in the 630th Engineer Company. He was then employed for over forty years as a Manager at Robison & Smith in Gloversville until his retirement. In his retirement years, Floyd worked Part-Time as a Bus Driver for the Greater Johnstown School District until age 75. Mr. King was a member of the former Gloversville VFW Post and the Lazy 8 R.C. Club. He is survived by one daughter Zeanza L. Penistan (Paul) of Johnstown, one brother Harold King (Emily) of Caroga Lake; one sister-in-law Elsie Snell; three grandchildren Khristian Owens, Brittany Penistan and Kelsie Rowe (Philip), one “adopted” grandson Cameron Steenburg-Loveless; two great grandchildren Logan Daniel Rowe and Hailee Elizabeth Rowe, two nephews Jeffrey Snell (Raina) and Stephen King; two godchildren Joseph Prue and Tina Prue Kuehner and his canine companion Buddy. In addition to his parents, Floyd was predeceased by his wife Betty Ann Snell King who he married on August 27, 1953 and who passed on March 28, 2020 and his brother-in-law Chester Snell whom passed on October 8, 2009. In keeping with Floyd’s request, there will be no calling hours. Cremation was at Vale Crematory, Schenectady. Memorial services and niche inurnment with his wife Betty Ann will be conducted at 10:30 A.M. on Tuesday, June 30, 2020 at the Gerald B.H. Solomon Saratoga National Cemetery, Schuylerville, New York with military honors. Contributions in Floyd’s memory may be made to the James A. Brennan Memorial Humane Society, 437 Nine Mile Tree Road, Gloversville, New York 12078. Arrangements have been entrusted to the A.G. Cole Funeral Home, Inc., 215 E. Main Street, Johnstown. Condolences to the family may be made online by visiting our website at www.agcolefuneralhome.com

The family of Floyd S. King Jr. created this Life Tributes page to make it easy to share your memories.

Send flowers to the King family.