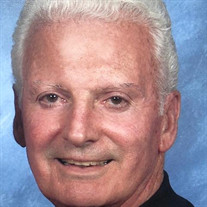 Foster Peter Precopio, age 84, of Johnstown, passed away Friday July 26, 2019 at St. Elizabeth Medical Center, Utica. He was the son of the late Peter Nicholas and Helen Maria Aguilera Precopio. Pete was a 1953 graduate of Johnstown High School, a 1958 graduate of Colgate University and received his Masters Degree from Sienna College. He was a star athlete playing football, basketball and baseball in high school and college, he was also a member of the semi pro Glove City Colonials and Fulton County Glovers. Pete was selected to be a member of the Capital District Football Hall of Fame. Mr. Precopio was employed as a department head and math teacher at Johnstown High School until his retirement. While at Johnstown High School he coached, football, basketball and golf. Survivors include his wife Jeanine Walter Precopio whom he married on May 2, 1953. His son Greg Precopio (Diane); daughter Linda Restive (Mario) a brother Joseph Precopio (Louise) and a sister Helen Simek; four grandchildren John Precopio (Erin), Suzanne Skinner (Kyle), Brittany Thomas and Troy Thomas; four great grandchildren Bevin, Foster, Jackson and Dani; nieces, nephews and many friends. In addition to his parents he was predeceased by a sister Phyllis King in 1981 and a brother-in-law Butch Simek in 2015. Funeral services will be conducted on Wednesday, July 31, 2019 at 4:00PM at the A.G. Cole Funeral Home Inc, 215 East Main Street, Johnstown. Visitation for family and friends will be on Wednesday, July 31, 2019 from 1 to 4 PM prior to the service at the funeral home. Memorial contributions in his memory may be made to the James A. Brennan memorial Humane Society, 437 Nine Mile Tree Road, Gloversville, New York 12078. Condolences may be made to the family at www.agcolefuneralhome.com

The family of Foster Peter Precopio created this Life Tributes page to make it easy to share your memories.

Send flowers to the Precopio family.