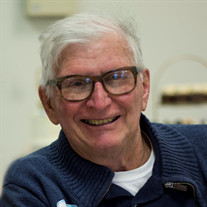 Fred L. Fagan, age 81 of Town of Perth, passed away on Monday, October 8, 2018 at his residence with his loving family by his side. He was born in Gloversville on February 12, 1937, a son of the late Arthur and Marion Kegg Fagan. Fred was a Class of 1954 graduate of Johnstown High School. He was a career dairy farmer at his family farm. Mr. Fagan served on the Fulton County Farm Bureau since 1957 and was the Director and President during the 1970s. Fred was on the Board of Directors of the local Agway Cooperative (GLF) and also served on the Soil and Water Conservation District Board. He is survived by his wife Margaret M. Michaelson Fagan who he married on August 31, 1957; seven children Greg Fagan (Kelly) of Perth, Anne Hogan (Jim) of Baldwinsville, Tricia Tauss (Ed) of Schenectady, Andy Fagan (Joe Hawk) of Waverly, Andrea Fagan (Chuck Savoie) of Broadalbin, Mike Fagan (Deb Smidgen) of Johnstown and Maureen Davio (Mike) of Fairport, one brother John Fagan (Donna) of Johnstown; sixteen grandchildren Matt, Bryan, Kelsey, Michael, Dawn, Kyley, Ryan, Rachael, David, Erin, Sarah, Jason, James, Jared, Emily and Meredith and ten great grandchildren Cameron, Avery, Jacob, Emma, Lila, Penelope, Emmett, Reed, Coraline and Finley and several nieces, nephews and cousins. In addition to his parents, Fred was predeceased by his two daughters Mary Fagan Poleto and Kathryn Fagan and his infant son Stephen Fagan. Visitation for family and friends will be on Friday, October 12, 2018 from 5:00 p.m. to 8:00 p.m. at Barter & Donnan Funeral Home, 1 N. Melcher Street, Johnstown. A Mass of Christian Burial will be celebrated at 1:00 p.m. on Saturday, October 13, 2018 at Holy Trinity Church, Glebe Street, Johnstown, New York with a one hour visitation period prior to the Mass from 12:00 p.m. (Noon) to 1:00 p.m. at the Church. Interment will be in St. Patrick’s Cemetery immediately following the Mass. Contributions in Fred’s memory may be made to Mountain Valley Hospice, 108 Steele Avenue, Gloversville, New York 12078, Holy Trinty Church Memorial Fund, 207 Glebe Street, Johnstown, New York 12095 or to the charity of one’s choice. Condolences to the family may be made online by visiting our website at www.barterdonnan.com

Fred L. Fagan, age 81 of Town of Perth, passed away on Monday, October 8, 2018 at his residence with his loving family by his side. He was born in Gloversville on February 12, 1937, a son of the late Arthur and Marion Kegg Fagan. Fred was... View Obituary & Service Information

The family of Fred L. Fagan created this Life Tributes page to make it easy to share your memories.

Send flowers to the Fagan family.