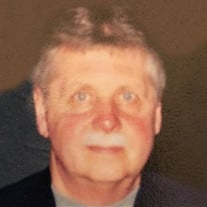 Garry A. Buchner, 73, of Johnstown, NY, passed away on Monday, July 22nd, 2019 at the Mountain Valley Hospice House, Gloversville, with his loving family by his side. Born on October 16th, 1945 in Gloversville, Garry was the eldest son of the late Anthony J. “Wheaties” Buchner and Beverly “Bev” Swann Buchner. Garry was a lifelong resident of Johnstown, graduating from Johnstown High School in 1964. Upon graduation, Garry joined the U.S. Army. While serving with First Battalion, 5th Infantry in Vietnam he was awarded the Commendation Medal for Heroism where, according to Col. Gordon Sumner Jr, Mr. Buchner acted with complete disregard for his own safety and his valorous action contributed immeasurably to the success of the mission. Following an honorable discharge from the U.S Army, Garry returned to his position with General Electric in Schenectady where he was employed in the Turbine Division for more than 30 years, retiring in 2004. Mr. Buchner was of the Catholic faith. He attended St. Patrick’s Parochial School and was a communicant of Holy Trinity Church. He was a proud member of the Johnstown Eagles Club, the Johnstown Moose and the Royal Mountain Moonlighters. Garry was an avid NY Giants and NASCAR fan. He could be found any given Sunday cheering (or yelling) at the TV in his “mancave”. On October 20th, 1973, Garry married the love of his life, Linda Dutcher Buchner. During their 45 years together, Garry and Linda built a remarkable life together filled with love, laughter and, most importantly, family. The only thing Garry treasured more than his sports teams was his family; he was the consummate family man. He found his greatest joy in life spending time with his children and grandchildren, whom he adored. Garry’s favorite moniker was Poppy, bestowed upon him by his grandchildren. He took great joy in attending their games, concerts, extracurricular activities and simply spending time with them. In addition to his wife, Mr. Buchner is survived by his two greatest accomplishments; his beloved daughter, Nicole L. Buchner Dingman and his cherished son, Garrett A. Buchner (Maria). Also surviving are Garry’s pride and joy, his grandchildren, Ian Dingman, Taylor Dingman and Trenton Clizbe; devoted brother, Danny Buchner; loving sister, Theresa Buchner (David Kuzmeski) and several dedicated, caring nieces, nephews and cousins. Calling hours will be held from 5:00pm to 7:00pm on Thursday, July 25, 2019 at Barter & Donnan Funeral Home, 1 North Melcher Street, Johnstown, NY. Memorial services will be conducted at 11:00 am, Friday, July 26, 2019 at the funeral home. Contributions in Garry’s memory may be made to Mountain Valley Hospice, 108 Steele Avenue, Gloversville, New York 12078. Condolences to the family may be made online by visiting our website at www.barterdonnan.com

Garry A. Buchner, 73, of Johnstown, NY, passed away on Monday, July 22nd, 2019 at the Mountain Valley Hospice House, Gloversville, with his loving family by his side. Born on October 16th, 1945 in Gloversville, Garry was the eldest son of the... View Obituary & Service Information

The family of Garry A. Buchner created this Life Tributes page to make it easy to share your memories.

Send flowers to the Buchner family.