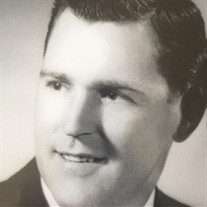 Hugh F. Carville of Delray Beach, FL and formerly Johnstown, NY passed away peacefully with his loving family by his side on February 21st. Hugh, age 91, was born on March 18, 1928 in Utica, NY, the son of the late Thomas J. and Nora (Devaney) Carville. As a child, Hugh was educated in the Utica, NY school system and graduated with a B.S. in Accounting from Utica College of Syracuse University. He was named Outstanding Alumnus in 1979. He served in the United States Army from 1946-1948 in Fairbanks, AK. Hugh met the love of his life, the late Geraldine R. (Ottman) Carville, while both teenagers were working at Addison Miller Pool in Utica with Gerry as a lifeguard and Hugh, well… a foot-checker. They married in 1952 and shared 59 wonderful years together raising two children and enjoying the livelihood of three grandchildren. Hugh began his career working at Bendix Corp., Hiteman Leather Co., Armour Leather Co., and Seton Leather Co. before starting his own leather business in 1967 and later expanding it to operating a full-service leather tannery, Carville National Leather Corp., in Johnstown, NY which operated for 45 years. Even while being a business owner, Hugh always found time and pleasure in serving a multitude of community affiliations which include, Fulmont Community Action Agency Chairman Emeritus, Fulton County Chamber of Commerce Board of Directors, Johnstown YMCA Board of Directors President, Tanners Council of America Board of Directors, Knights of Columbus Council #189, Fulton Montgomery Community College Vice Chairman, and Fulton Montgomery Community College Honorary Director. Hugh also served 32 years as a member of the Board of Trustees at Lynn University in Boca Raton, FL and holds the honor of being named Chairman Emeritus having served 17 years as the Chairman of the Board. Being from a large Irish Catholic family, it was natural for Hugh to know how to love life and especially those around him. He had a special zest for humor and always exhibited it to everyone he ever met. His joke telling is his signature trademark admired by many. He loved sports having played football, soccer and baseball in high school and college. He took special pride in his children, his grandchildren, his many nieces and nephews and his beloved other children who often thought of him as dad. Hugh loved being involved in state and local politics and made many friends at that level. Hugh’s life philosophy could be described as... a stranger soon becomes a friend who is always welcome in my home. Hugh is survived by two children, Bobby (Leesa) and Joan (Matthew); three grandchildren Kelsey, Jared and Patrick; four brothers James, Leo (Doris), Frederick (Marlene) and Gerald; three sisters Madeline (John), Aneita Babicz and Carol Byrne; sisters-in-law, Jane and Diane; brother-in-law John (Mary) Ottman; and 42 nieces and nephews. He was predeceased by his wife Geraldine; his grandson Tristan; his in-laws John and Ruth Ottman: two brothers Edmond and Thomas; one sister Joan, two brothers-in-law Ronald Babicz and James Byrne; sisters-in-law Barbara and Jane; niece Sherry; nephews Timothy and Johnny. Visitation will be held Wednesday, Feb. 26 from 10:30 - noon immediately followed by a Catholic service at Glick Family Funeral Home, 3600 N. Federal Hwy, Boca Raton, FL. In the summer, a memorial mass and interment will take place at Holy Trinity Catholic Church and St. Patrick’s Cemetery in Johnstown, NY followed by a Celebration of Life in Utica, NY. Two passions that were close to Hugh’s heart are Lynn University and Fulmont Community Action Agency. In lieu of flowers, please consider a donation in Hugh’s memory to either Lynn University Men’s Lacrosse Team where he enjoyed watching his grandson play college lacrosse and Fulmont Community Action Agency in upstate NY where Hugh lived for most of his life. Arrangements are by A.G. Cole Funeral Home, 215 East Main Street, Johnstown. For online expressions of sympathy, go to www.agcolefuneralhome.com

Hugh F. Carville of Delray Beach, FL and formerly Johnstown, NY passed away peacefully with his loving family by his side on February 21st. Hugh, age 91, was born on March 18, 1928 in Utica, NY, the son of the late Thomas J. and Nora (Devaney)... View Obituary & Service Information

The family of Hugh F. Carville created this Life Tributes page to make it easy to share your memories.

Send flowers to the Carville family.