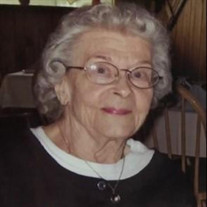 Joan Margaret Gifford of Johnstown, a resident of the Wells Nursing Home since 2015 passed away on Sunday, October 31, 2021. She was born on September 6, 1929, in Gloversville NY, to the late Stephen and Blanche (Empey) Ardizzone. Joan married Charles E. Gifford at the Foothills United Methodist Church on September 11, 1954, in Gloversville, NY. They were married until his death on March 6, 2010. Joan graduated from Johnstown High School in 1947 and Mildred Elley Business School. She was employed as a secretary for Schine’s Theatres and General Telephone Company and last worked at the Flower Pot in the Johnstown Mall. Her greatest satisfaction came from being a homemaker. She was an avid reader and loved doing word puzzles, keeping scrapbooks and making sure her massive photo album collection which chronicled the family’s history was up to date. Joan is survived by her children, Michael Gifford (Joanne), James Gifford (Lynne), Jack Gifford (Karol), Sally Ward (John), and Leanne Gifford; grandchildren, Katherine Fazel, Christine Spear, Michael Gifford Jr., Jessica Johnson, Samantha Gifford, Jacquelyn Powers, Stephanie Castagna, Stephen Gifford, William McMaster, Tyler McMaster; great grandchildren, Kamron and Logan Fazel, Eva Spear, Riley and Brooke Powers, Emmalynne Johnson. Joan is also survived by Michael Schreivogl; in-laws, Sally Brenner, Suzanne Gifford, Shirley (Harold) Estes, and George Maher; as well as several nieces, nephews and cousins. In addition to her husband and parents, Joan was pre-deceased by an infant son, James Charles Gifford; stepmother, Belle Ardizzone; stepbrother, Salvatore Maida. The family wishes to thank the staff of the Wells Nursing Home for their loving and professional care during Joan’s time there. Per Joan’s request there will be no calling hours. A Graveside services will be held at the convenience of the family with the A.G. Cole Funeral Home, Inc. handling the arrangements. In lieu of flowers, memorial contributions may be made to the James A Brennan Humane Society or a charity of choice. Condolences to the family may be made online by visiting our website at www.agcolefuneralhome.com

Joan Margaret Gifford of Johnstown, a resident of the Wells Nursing Home since 2015 passed away on Sunday, October 31, 2021. She was born on September 6, 1929, in Gloversville NY, to the late Stephen and Blanche (Empey) Ardizzone. Joan married... View Obituary & Service Information

The family of Joan M. Gifford created this Life Tributes page to make it easy to share your memories.

Joan Margaret Gifford of Johnstown, a resident of the Wells Nursing...

Send flowers to the Gifford family.