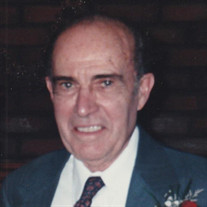 John G. “Jack” Biscotti, 97, of Johnstown, N.Y. passed away peacefully Saturday, November 14, 2020 at Albany Medical Center. He was born November 6, 1923 in Amsterdam, N.Y. son of the late John and Marjorie Deyoe Biscotti. Jack graduated from Johnstown High School, Class of 1942. He honorably served in the U.S. Navy during World War II first aboard the U.S.S. Cascade as a Carpenter’s Mate and then the U.S.S. Reynolds, a destroyer escort in the Pacific Theater. Jack married his “Rose,” Helen Anna Dodge, January 18, 1946. Jack grew beautiful roses and would bring Helen bouquets and tell her “a rose for a Rose.” She passed away November 7, 2007. Jack worked as a Carpenter for the Greater Johnstown School District for 31 years. He was a skilled craftsman who could make you anything, just tell him what you would like and give him the measurements and he would make it for you, asking nothing in return. Jack was a member of the Adirondack Baptist Church. Jack is survived by his son James Biscotti (Clara) of Johnstown, daughter Nancy Hayes (Tom) of Glen, sister Frances Becker of Gloversville, granddaughter Gina Biscotti of New York City, step granddaughter Cheryl Gifford (Bill) and children Molly and Cody and several nieces and nephews. In addition to his wife, Mr. Biscotti was predeceased by his sister Beverly O’Brien, brother Edgar Biscotti, brother-in-law Walt Becker, step grandson Steve Van Brocklin and his faithful dog “Rosie.” Funeral services will be conducted at 12:00 p.m. (Noon) on Monday, November 23, 2020 at Adirondack Baptist Church, 1431 State Highway 29, Gloversville. Visitation for family and friends will be prior to the service on Monday, November 23 from 10:00 a.m. to 12:00 p.m. (Noon) at the Church. Interment with Military Honors will be in Fern Dale Cemetery, Johnstown. Contributions in Jack’s memory may be made to the Fulton County Office for the Aging, 19 N. William Street, Johnstown, New York 12095 or to the Adirondack Baptist Church, 1431 State Highway 29, Gloversville, New York 12078. Arrangements have been entrusted to the A.G. Cole Funeral Home, Inc. 215 East Main Street, Johnstown, New York 12095. Condolences to the family may be made online by visiting our website at www.agcolefuneralhome.com

The family of John G. Biscotti created this Life Tributes page to make it easy to share your memories.

Send flowers to the Biscotti family.