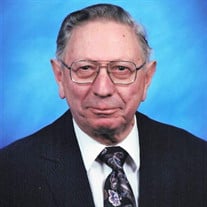 John D. Cellary entered into the arms of his Lord on Sunday, May 23, 2021, at Mountain Valley Hospice, with his family by his side. Born June 12, 1927 in Johnstown, NY, he was a lifelong Johnstown resident. John was a graduate of Johnstown High School. A month after graduation in 1945, John was drafted into the Army. After his honorable discharge, John was a carrier for the US Postal Service for 35 years. In 2019, he received an award for 60 years of union membership. John was of the Catholic faith, a communicate of the former Immaculate Conception and the current Holy Trinity Church. John’s faith was a very important part of his life. He enjoyed sharing stories of being an altar boy, driving priests to and from the Auriesville Shrine as a teenager, driving nuns to and from the Teresian House as an adult, serving as an usher, a member of the choir and as a Eucharistic minister. He enjoyed working at numerous Italian Festivals, spaghetti dinners and bingo nights at the former Immaculate Conception. He was also a member of the Broadalbin American Legion, Johnstown Eagles and the Johnstown Knights of Columbus. On November 1, 1951, John was united in marriage to Rose M. DelSignore at the former Our Lady of Mt. Carmel Church in Gloversville, NY. They enjoyed 66 years marriage until she passed away on December 22, 2017. John is survived by two sons, Timothy Cellary (Carolyn Henzel) of Johnstown, NY and Richard (Donna) Cellary of Shrewsbury, NJ; two grandchildren, Kristen and Heather Cellary of NJ, several brother and sister-in-laws and many nieces and nephews. The family would like to express their sincere appreciation for the care and compassion shown to John by Debbie Small and Chris Geralach. Visitation for friends and family will be held at Holy Trinity Church, 205 Glebe St, Johnstown on Saturday, May 29th from 10:00AM to 11:00 AM. A Mass of Christian burial will immediately follow. Interment will be at Mt. Carmel Cemetery, Johnstown. Donations in John’s name may be made to Mountain Valley Hospice, 108 Steele Ave, Gloversville, NY 12078 or The Holy Trinity Memorial Fund c/o Holy Trinity Church, 205 Glebe St, Johnstown, NY 12095. Arrangements have been entrusted to the Barter & Donnan Funeral Home, 1 North Melcher Street, Johnstown. Condolences to the family may be made online by visiting our website at www.agcolefuneralhome.com

John D. Cellary entered into the arms of his Lord on Sunday, May 23, 2021, at Mountain Valley Hospice, with his family by his side. Born June 12, 1927 in Johnstown, NY, he was a lifelong Johnstown resident. John was a graduate of Johnstown... View Obituary & Service Information

The family of John D. Cellary created this Life Tributes page to make it easy to share your memories.

John D. Cellary entered into the arms of his Lord on Sunday,...

Send flowers to the Cellary family.