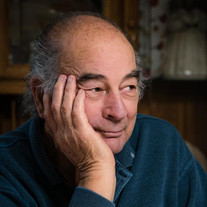 John C. Vietri, 83, of Johnstown, passed away on Monday, June 3, 2019 at St. Peter’s Hospital, Albany. He was born on May 1, 1936 in Gloversville, a son of the late Joseph and Madeline Clemente Vietri. John was a graduate of Gloversville High School and honorably served his country in the U.S. Army. He was employed for many years as a Machinist for General Electric in Schenectady until his retirement. John treasured his immediate and extended family and loved spending time with them. In his devoted walk with Christ he became a father figure who positively impacted many lives. He was also an avid movie buff, loved to read and enjoyed his monthly card game. John was president of Full Gospel Business Men’s Fellowship International for several years. He is survived by his wife Ellen J. Caminiti Vietri who he married on May 10th, 1959, one son Joseph J. Vietri (Phyllis) of Johnstown and one daughter Elisa Vietri of Cleveland, Ohio, two grandchildren J.T. Vietri and Steven Vietri; one brother Frank Vietri (Leslie), two sisters Martha Mongato and Marie Steding (Gary), one sister-in-law Janis Vietri and several nieces, nephews, cousins and extended family. In addition to his parents, John was predeceased by one brother Pasquale “Pucky” Vietri; two sisters Josephine DelCostello and Jeanne Botch and three brothers-in-law Joseph Mongato, Frank “Chic” DelCostello and Albert Botch. There will be no calling hours. A gathering will be held to honor John's life on June 9, 2019, 4pm at Hales Mills Country Club, 146 Steele Rd, Johnstown, NY 12095. Memorial contributions may be made in lieu of flowers to the Glen Animal Hospital, 221 Burley Rd, Fultonville, NY 12072 or to Jezreel International, 10 Interstate Avenue, Albany, New York 12205. Cremation was at Vale Crematory, Schenectady. Arrangements have been entrusted to the Barter & Donnan Funeral Home, 1 N. Melcher Street, Johnstown. Condolences to the family may be made online by visiting our website at http://www.barterdonnan.com.

John C. Vietri, 83, of Johnstown, passed away on Monday, June 3, 2019 at St. Peter&#8217;s Hospital, Albany. He was born on May 1, 1936 in Gloversville, a son of the late Joseph and Madeline Clemente Vietri. John was a graduate of Gloversville... View Obituary & Service Information

The family of John C. Vietri created this Life Tributes page to make it easy to share your memories.

Send flowers to the Vietri family.