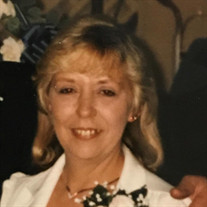 Kathleen E. “Kathy” Gargiulo, age 68, of Johnstown lost her four-year battle with cancer on Thursday, March 7, 2019 at Wells Nursing Home surrounded by her loving family. She was born on April 7, 1950 in Gloversville, a daughter of the late Edward Coadney and Evelyn Antis Coadney. Kathy was a graduate of Johnstown High School and was employed in various jobs over the years. She worked for many years at Androme Leather in Gloversville. She was last employed for 15 years as a Deli Clerk at Price Chopper in Johnstown before her retirement in 2014. She was of the Catholic faith. Kathy enjoyed bowling in various local leagues, visiting the Turning Stone Casino, bingo, picnics with her family, watching softball at Meco Ball park where her son Michael played in many leagues, and her many cats over the years. She is survived by one daughter Lori Western (Frank Gillotti) of Johnstown; two sons, Ron DeLorenzo (Nicole) of Sammonsville and Michael Gargiulo of Johnstown; two brothers Richard Coadney of Amsterdam and William Coadney (Joan) of Queensbury; grandchildren Nicole Mackey, Harry Western III, Stephanie DeLorenzo, Kayla DeLorenzo-Bochenek (Brian), Olivia Gargiulo, Madisyn and Maria Gillotti, and sister-in-law, Vincenza Coadney and several nieces, nephews and cousins. In addition to her parents, she was predeceased by two brothers Robert Coadney and James Coadney. A memorial service will be conducted at 7 pm on March 14th at the A.G. Cole Funeral Home, Inc., 215 E. Main Street, Johnstown with Lay Supply Pastor Ron Talbott officiating. Memorial visitation for family and friends will be prior to the service on March 14th from 4 pm to 7 pm at the funeral home. Interment will be in St. Patrick’s Cemetery in the Spring. The family wishes to express their deepest gratitude to Dr. Sarwer at St. Mary’s as well as Dr. Mohammed Shareef and the wonderful staff at the St. Mary’s Cancer Center who were so caring and took care of her every need during her treatments. To the staff at The Wilkinson Center and most recently, The Wells Nursing Home. You were all so wonderful, especially as we were near the end. We can’t thank you all enough. You all made her time there so much easier for her and the whole family. Contributions in Kathy’s memory may be made to the James A. Brennan Memorial Humane Society, 437 Nine Mile Tree Road, Gloversville, New York 12078. Condolences to the family may be made online by visiting our website at www.agcolefuneralhome.com

Kathleen E. &#8220;Kathy&#8221; Gargiulo, age 68, of Johnstown lost her four-year battle with cancer on Thursday, March 7, 2019 at Wells Nursing Home surrounded by her loving family. She was born on April 7, 1950 in Gloversville, a daughter... View Obituary & Service Information

The family of Kathleen E. "Kathy" Gargiulo created this Life Tributes page to make it easy to share your memories.

Send flowers to the Gargiulo family.