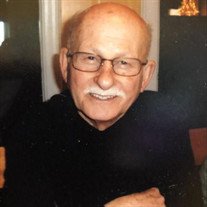 Lawrence M. Fisher, 88, of Gloversville, completed his journey on earth, passing away on Sunday, March 6, 2022, at the Mountain Valley Hospice House in Gloversville, NY, and is now a blessed angel in heaven. Lawrence, known as “Larry by his family and friends, was born on Mother’s Day, May 14, 1933, in Gloversville, NY, to parents Leon W. and Katherine Buyce Lawrence Fisher. Larry was a 1954 graduate of the former Broadalbin High School. He was also of the protestant faith and was a parishioner at the Emmanuel Baptist Church in Gloversville, NY. After High School, Larry enlisted in the NY Army National Guard before being drafted into the United States Army where he proudly served his country from 1956 to 1958 in Nuremberg, Germany. While in the army, Larry earned the rank of corporal as a member of the ”Fighting Eagles” Bravo Company, 8th Infantry Regiment, 8th Infantry Division. As a young, married man, Larry worked at various local arca businesses, most notably at the former Gloversville YMCA, as well as being a dedicated employee at Montano's Electrical Supply/Warren Electric, retiring in 2019 after S1 years of service. Larry, affectionately known as "PePa" to his 22 grand and great grandchildren, was a loving family man who enjoyed visiting and spending time with not only his grandchildren, but also his six children and four sisters, as well as his extended church family. In addition to being family-oriented, Larry enjoyed many hobbies including cooking, photography, doing puzzles and word searches, dining out with family, watching old TV shows, and rooting on his favorite NY sports teams, the Yankees, and Giants. But the hobby that he enjoyed with all his heart and was passionate about was distance running, which was a sport that he took up at the age of 41 and actively participated in until the age of 84. Larry was often seen running on the city streets of Gloversville, as he ran 6 miles a day, six days a week, along with competing in a multitude of races over a 43-year span. He proudly logged over 60,000 miles, was a member of the Fulmont Roadrunners Club and was awarded an abundance of medals, ribbons, and trophies, which he proudly displayed. His greatest running achievements were competing and finishing the Boston Marathon and running the Boilermaker Race in Utica several times. Larry, whose favorite color was red, has been described by many as a selfless, generous, and kind-hearted person. Ask anyone who knew him and they'd proudly share that he never uttered a negative word about anyone during his life. He will be greatly missed by all who's lives he touched in some positive way. Larry was married in 1955 to the late Patricia M. Wilcox for 26 years and is survived by six of his children which include two sons, Timothy (Valerie) Fisher of Elkhart, IN, Kevin (Jen Ticknor) Fisher of Cohoes; four daughters, Rebecca (Leonard Jr.) Dutcher, Amy Rankin, and Valorie Oathout, all from Gloversville, and Dayna Fisher of Mayfield, NY. In addition, he is survived by four sisters, Patricia Castellucci of Mayfield, Donna Morehouse of Johnstown, Yvonne (Delois) Woodruff from Northampton and Janice Peacock from Rexford, NY. Larry will now watch over and protect from above, his cherished nine grandchildren; Rachelle, Danielle, Kerry, Joshua, Cory, TJ, Turner, Emily, and Rei and 13 great-grandchildren; Gabrielle, Ja'Khia, Teagan, Taylor, Donovan, Caleb, Connor, Kolton, Liam, Grayson, Yalena, Oliver, and Odin, all of whom he adored with all his heart. Along with his parents and former wife, Larry was also predeceased by his infant daughter Tamara Joy Fisher, brother Dale Fisher, sister Winnifred Horning and great-grandson Jory Jackson. There will be no funeral service as per his family wishes. Cremation will take place and final interment will be at Ferndale Cemetery in Johnstown, NY. A Celebration of Larry's life will take place at a later date at the convenience of his family. Arrangements are being made by A. G. Cole Funeral Home Inc., 215 E. Main Street, Johnstown, NY. In lieu of flowers, the family asks that any donations be made in Larry's name to any one of the following: The Fulmont Roadrunners Club, The American Cancer Society, Alzheimer's Association, or the Diabetes Association of America. Condolences to the family may be made online by visiting our website at www.agcolefuneralhome.com

Lawrence M. Fisher, 88, of Gloversville, completed his journey on earth, passing away on Sunday, March 6, 2022, at the Mountain Valley Hospice House in Gloversville, NY, and is now a blessed angel in heaven. Lawrence, known as &#8220;Larry... View Obituary & Service Information

The family of Lawrence M. Fisher created this Life Tributes page to make it easy to share your memories.

Send flowers to the Fisher family.