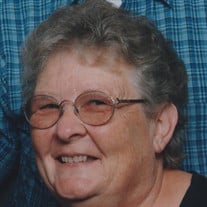 Marion E. Blanchard, age 84, of Johnstown, passed away peacefully on Friday, January 15, 2021 at Wells Nursing Home. She was born on September 19, 1936 in Mayfield, NY to the late Walter Crowter and Eva Mae Stewart. Marion was an amazing woman who cherished her family, would do anything to help anyone in need and instantly became everyone’s friend. She enjoyed life to it’s fullest; enjoying long motorcycle rides on their Harley, playing “SCAT” during weekly card nights, BINGO, flower gardening, family gatherings, her beloved furry friends over the years and country music, especially her “boyfriend” Aaron Tippin. As time moved forward, she really enjoyed attending the Johnstown Senior Center. After moving in to Wells Nursing Home, Marion continued to be a “social butterfly” and could be seen all over the unit making friends, participating in activities and keeping staff “on their toes” during the night. Marion was employed as a Glove Sewer for several local companies including the former Johnstown Knitting Mill. She was a 4-H Leader, proud member of the Sir William Johnson Fire Department’s Lady’s Auxiliary for many years and also served as a member of the Board of Directors for Lexington Center for over twenty years, retiring in 2002. Marion was so proud to be part of the Lexington family over the years and ran Wednesday night BINGO which was held weekly at Burke. Marion is survived by her loving husband Ernest L. “Ernie” Blanchard whom she married on June 28, 1953; three children Roger Blanchard, Robin Winchell (Kenny Felthousen) and Paul Blanchard; two grandchildren Erik Winchell (Lynda) and Lisa Westerling (Stephen); and two great granddaughters whom she absolutely adored, Madalyn and Carly Winchell. She is also survived by several brother and sister in-laws, nieces, nephews, cousins and friends. In addition to her parents, Marion was predeceased by her grandson Roger William “RW” Blanchard, two siblings Sonny Crowter and Eleanor Fort and several other family members. In keeping with her wishes, there will be no calling hours or funeral services. A celebration of life will be held at a later date. Marion’s family would like to extend their deepest appreciation to the staff of Wells Nursing Home for the excellent care they have provided her over the past five years. In lieu of flowers, contributions in Marion’s memory may be made to the Lexington Foundation or Wells Nursing Home. Arrangements have been entrusted to the A.G. Cole Funeral Home, Inc., 215 E. Main Street, Johnstown. Condolences to the family may be made online by visiting our website at www.agcolefuneralhome.com

Marion E. Blanchard, age 84, of Johnstown, passed away peacefully on Friday, January 15, 2021 at Wells Nursing Home. She was born on September 19, 1936 in Mayfield, NY to the late Walter Crowter and Eva Mae Stewart. Marion was an amazing woman... View Obituary & Service Information

The family of Marion E. Blanchard created this Life Tributes page to make it easy to share your memories.

Send flowers to the Blanchard family.