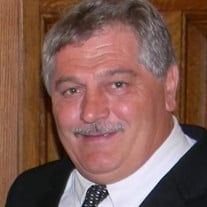 Mark “The Shark” Stegel, age 63, of Gloversville, passed away peacefully, Friday August 23, 2019 at the home of his daughter Marcia, after a long illness where he was surrounded by his family. He was the son of the late Joseph and Jennie Pantalone Stegel. He was born in Niskayuna, NY on March 11, 1956 and attended Schenectady schools, graduating from Mont Pleasant High School in 1974. Mark was employed for many years as a leather worker for local tanneries, until his retirement in March 2018. His legacy in life is the love and devotion he felt for his family and friends. He always said that he had “the best kids in the world”. Being with any of his family or friends were his favorite places to be followed by the woods and the lake. He was a simple man that loved life, sports, attending many activities that his family members were in involved in, being outdoors, camping, hunting, making people laugh, music and dancing. He had an enormous heart, was very generous, loved unconditionally and many meaningful relationships. Because of these qualities he left an imprint in many people’s lives. Survivors include one son Paul Stegel (Hollie); three daughters Marcia Oddy, Angela Raneri (Andrew) and Jenny Stewart (William); two brothers Robert Stegel and Joseph Stegel (Diane); one sister Marlene Nellis (James); grandchildren Janaye Gray, Alandra Oddy, Aubrey Stegel, Ryan Stegel, Alison Stegel, Kyle Stegel, Anabel Stegel, Vivienne Raneri, Vera Raneri, Natalie Stewart; great grandson Jagger Plantz and waiting the arrival of his first great granddaughter Isabelle Stegel; many nieces, nephews and cousins. In addition to his parents he was predeceased by a sister Marilyn Jordan and his son-in-law, Robert H. Oddy, Jr. Memorial services will be conducted by Reverend Dr. Robert E. Walter on Thursday, August 29, 2019 at 10:00 AM at the First Baptist Church, Comrie Ave., Johnstown. Memorial visitation for family and friends will be on Wednesday, August 28, 2019 from 4PM until 7PM at the Barter & Donnan Funeral Home 1 N. Melcher Street, Johnstown. Memorial contributions in his memory may be made to Mountain Valley Hospice, Gloversville, New York 12078. Condolences may be made to the family at www.barterdonnan.com

Mark &#8220;The Shark&#8221; Stegel, age 63, of Gloversville, passed away peacefully, Friday August 23, 2019 at the home of his daughter Marcia, after a long illness where he was surrounded by his family. He was the son of the late Joseph and... View Obituary & Service Information

The family of Mark "The Shark" Stegel created this Life Tributes page to make it easy to share your memories.

Mark “The Shark” Stegel, age 63, of Gloversville, passed away...

Send flowers to the Stegel family.