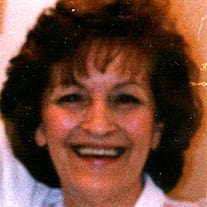 Mary E. Martin, age 82, of Johnstown, passed away on Friday, September 20, 2019 at her residence with her family by her side. She was born on January 12, 1937 in San Francisco, California, the daughter of the late Harold L. Hamm, Sr. and Emma Williams Hamm Wedgren. Mary attended Philadelphia and Utica Schools and was a graduate of the Utica Free Academy in 1954. She was employed for many years at General Electric Radio Receiver Division at Broad & Bleecker Street in Utica and later in the Aerospace Division of G.E. at French Road, also in Utica. When Mrs. Martin and her family later relocated to Fulton County, she began at career in Healthcare, working first at the Fulton County Infirmary and later at Pineview Commons. She then worked at Coleco in Gloversville and later returned to the Healthcare Industry as a private duty CNA and lastly as a Hospice CNA. She is survived by her three children Ronald G. Martin of St. Petersburg Beach, Florida, Michele Breen of Herkimer and Neil Martin (Tamie) of Johnstown; four brothers Hal Hamm (Bonnie) of Billings, Montana, Earl Hamm of Johnstown, Jack Hamm, Sr. of Gloversville and Henery Wedgren of Brookfield; five grandchildren; fourteen great grandchildren, one great great grandchild and several nieces, nephews and cousins. In addition to her parents, Mary was predeceased by her husband Ronald A. Martin whom she married on September 24, 1954 and whom passed on September 3, 1978; three brothers Harry D. Hamm, Gordon L. Hamm and Herman Wedgren and five sisters-in-law Lottie Hamm, Joyce Hamm, Nita Hamm, Crystal Wedgren and Marie Wedgren. There will be no calling hours. Memorial services will be conducted at the convenience of his family. Contributions in Mary’s memory may be made to a charity of one’s choice. Arrangements have been entrusted to the A.G. Cole Funeral Home, Inc., 215 E. Main Street, Johnstown. Condolences to the family may be made online by visiting our website at www.agcolefuneralhome.com

Mary E. Martin, age 82, of Johnstown, passed away on Friday, September 20, 2019 at her residence with her family by her side. She was born on January 12, 1937 in San Francisco, California, the daughter of the late Harold L. Hamm, Sr. and Emma... View Obituary & Service Information

The family of Mary E. Martin created this Life Tributes page to make it easy to share your memories.

Send flowers to the Martin family.