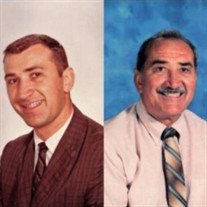 Milan “Moose” Ralbovsky passed away on February 15, 2021. An educator, coach, leader and most of all, family man, Moose left a lasting positive impression on so many people. Born in Johnstown on March 1, 1933, he was a son to the late Peter and Mary Pochily Ralbovsky. Moose attended Johnstown schools graduating in both 1950 and 1951, the last year post graduates were able to go to school. He then enlisted in the United States Navy along with many of his “North End” neighbors. He honorably served for 4 years and took a job with Pratt & Whitney and continued with that until joining the Johnstown Police force. Milan decided to get a college degree and attended numerous local colleges culminating with a degree in English from Michigan State University. He married in 1959 to his beloved wife of 59 years, Mollie Williams Ralbovsky who predeceased her husband in 2018. Together they built a family and a home in Johnstown. Moose went on to teach at Oppenheim-Ephratah, Wheelerville, Broadalbin and eventually Broadalbin-Perth Central Schools. An elementary teacher, middle school science teacher, coach and advisor, his career spanned 37 years. His community involvements included many years coaching Little League, serving as a city alderman and holding many offices including President of the Johnstown Fraternal Order of the Eagles – an organization he held close to his heart and got many of his family to join. Moose and Mollie had 5 children, Milan (Mary) Ralbovsky, Mark (Pam) Ralbovsky, Amy and Jeff Kollar, Michael Ralbovsky, Joe (Ann) Ralbovsky. Their greatest joy later in life was spending time with their 11 grandchildren, Matt and Robert Ralbovsky, Marcus and Victor Ralbovsky, Jase, Katie and Hillary Kollar, Sam and Olivia Ralbovsky, Jack and Frankie Ralbovsky. To date, they also have 4 great grandchildren. The family would like to thank the many groups that extended care to Milan and the family. They include Nathan Littauer Hospital staff, Home Health Care Partners and many doctors including his favorite – Dr. Schwartzmann. Donations can be given to the Home Health Care Partners, 1830 Riverfront Center, Amsterdam NY, 12010. Due to Covid, there will be no viewing or funeral. A celebration of Moose’s Life will be scheduled sometime in the near future. Arrangements have been entrusted to the Barter & Donnan Funeral Home, 1 North Melcher Street, Johnstown. Condolences to the family may be made online by visiting our website at www.agcolefuneralhome.com

Milan &#8220;Moose&#8221; Ralbovsky passed away on February 15, 2021. An educator, coach, leader and most of all, family man, Moose left a lasting positive impression on so many people. Born in Johnstown on March 1, 1933, he was a son to the... View Obituary & Service Information

The family of Milan "Moose" Ralbovsky created this Life Tributes page to make it easy to share your memories.

Send flowers to the Ralbovsky family.