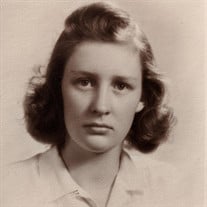 Mildred J. Rathburn, age 94, of Johnstown, passed away on Saturday, December 21, 2019 at Wells Nursing Home. She was born in Utica on June 9, 1925, a daughter of the late Thomas Jinks and Sarah Howarth Jinks. Mildred was a high school graduate and was employed for many years at the former Knox Gelatine Company. She later worked as a Receptionist for Dr. Richard Wagner in Johnstown. Mrs. Rathburn was of the Episcopalian faith, a member of St. John’s Episcopal Church. Always an avid reader and history buff, she steered those interests into an amateur genealogy career. Before the internet, she and her husband Gaal did the hands on research, traversing the country side from cemetery to cemetery to find names and families dating back to the American Revolution. A long-time patron of and volunteer for the Johnstown Public Library she and Gaal found and archived hundreds of obituaries to keep the genealogical record intact for future generations. She is survived by her son David Rathburn (Kim) of Florida, six grandchildren Jon (Kathy) Martin, Patrick (Becky) Martin, David (Virginia) D’Amore, Daniel (Tory) D’Amore, Heather (Mike) Virga, Hillary (David) Perry; ten great grandchildren Jacob Martin, Erik Martin, Elizabeth Martin, Augustus D’Amore, Ashlyn Martin, Azya D’Amore, Cecelia D’Amore, Mila Perry, Skylar D’Amore and Christopher Virga, sons-in-law Carmelo D’Amore and Karl Martin; sister-in-law Elinor Jinks along with several nieces, nephews and cousins. Mildred was predeceased by her husband Gaal W. Rathburn whom she married on October 8, 1942 and whom passed on May 2, 2013, two daughters Susan G. D’Amore and Phyllis Martin and two siblings Albert Jinks and Brenda Richmond Lider. A graveside service will be conducted in the Spring at Evergreen Cemetery, Fonda. Contributions in Mildred’s memory may be made to the Willing Helper’s Home or the Johnstown Public Library. Arrangements have been entrusted to the Barter & Donnan Funeral Home, 1 N. Melcher Street, Johnstown. Condolences to the family may be made online by visiting our website at www.barterdonnan.com

Mildred J. Rathburn, age 94, of Johnstown, passed away on Saturday, December 21, 2019 at Wells Nursing Home. She was born in Utica on June 9, 1925, a daughter of the late Thomas Jinks and Sarah Howarth Jinks. Mildred was a high school... View Obituary & Service Information

The family of Mildred J. Rathburn created this Life Tributes page to make it easy to share your memories.

Mildred J. Rathburn, age 94, of Johnstown, passed away on Saturday,...

Send flowers to the Rathburn family.