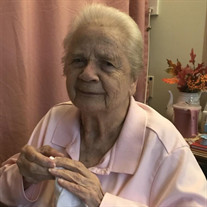 Patricia A. Peterson, 95, of Palatine Bridge, New York passed away on Friday, January 8, 2021 at the Palatine Nursing Home where she resided since 2014. Mrs. Peterson was born August 26, 1925 in the Bronx. She was the daughter of the late Chester J. and Erica Shirrmacher Monplaisir. She was of Lutheran faith. Mrs. Peterson was a regents diploma graduate of New Dorp High School on Staten Island, New York. She was united in marriage to Sgt. David E. Peterson, Jr. in LA , California February 1, 1944 while David was stationed at Muroc Field. David predeceased her on January 20, 1989. Mrs. Peterson was employed as a Banker in Manhattan, worked as an aide at Willow Brook and Richmond Memorial Hospital and had her own knit shop on Staten Island. Mrs. Peterson moved to Brown’s Hollow, Canajoharie with her husband David, her mother in law Ann Peterson and 4 children in 1960. She was employed as an Assistant Cashier at the Canajoharie Central National Bank until her retirement. She was a member of the National Association of Bank Women. She also served as a treasurer of the local Salvation Army, and was a volunteer Dispatcher of the Mid County Ambulance service. Pat loved the sunshine, antiques, reading, travel, sewing , crocheting, knitting and music. Collected jokes out of the newspaper put them in a fancy candy box to read on gloomy days for a good laugh. She loved singing Hymns. Her favorite was “His eye is on the Sparrow”, and her children were often sung to sleep with “Swing low, Sweet Chariot”. Mrs. Peterson was predeceased by her infant son Andrew Joseph Peterson, her husband David, her brother Chester Monplaisir and her oldest granddaughter Coreena Marie Pedrick. Survivors include : Patricia’s sister Mrs. Joan Hamilton of Florida. Her children, Alexis M. Pedrick (Ronald) of Johnstown, Arthur D. Peterson (Deborah) of Palatine Bridge, Arlene P. Williams (David) of Canajoharie and Audrey F. Fowler (Joseph) of Canajoharie. Grand children include: Stacey Holliday, Raquel Pedrick- Swatt, Ronald Pedrick, Jr. , Adrian Peterson, Jessica Williams, Laura Williams, Barbara Massie, Tyson Fowler, Dontay Fowler, Caleb Fowler, and Nathan Fowler. Patricia had 28 great-grandchildren , and 9 great- great grandchildren and Special nieces and nephews. There will not be any Services or calling hours at this time. Family will meet in the “Sun Shine” in the Spring at The Gerald B. H. Solomon Saratoga National Cemetery, Schuylerville, New York. In lieu of flowers, contributions in her memory may be made to your local Salvation Army ([email protected]) and the Canajoharie Volunteer Fire Dept ( 75 Erie Blvd Canajoharie, NY , 13317). Arrangements have been entrusted to The Barter and Donnan Funeral Home, 1 N. Melcher St., Johnstown, NY. Condolences to the family may be made online by visiting our website at www.agcolefuneralhome.com

Patricia A. Peterson, 95, of Palatine Bridge, New York passed away on Friday, January 8, 2021 at the Palatine Nursing Home where she resided since 2014. Mrs. Peterson was born August 26, 1925 in the Bronx. She was the daughter of the late Chester... View Obituary & Service Information

The family of Patricia A. Peterson created this Life Tributes page to make it easy to share your memories.

Send flowers to the Peterson family.