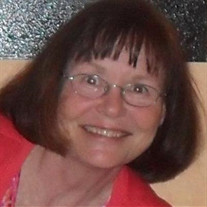 Patricia “Patty” L. Wille, age 62 of Johnstown, passed away peacefully on Thursday, January 31, 2019 with her loving family by her side. She was born to the late Roger Berry and Shirley Brooks McCold in Pittsburgh, Pennsylvania on August 2, 1956. Patricia spent most of her youth growing up in Florida before moving to New York in 1973. She was a graduate of Gloversville High School. Mrs. Wille was of the Episcopalian faith and was an active member of St. John’s Episcopal Church in Johnstown. She was employed at Euphrates, Inc. in Johnstown. Patty is survived by her husband Peter Wille whom she married on August 10, 1974; her son Ryan Wille and his son Carter Wille; her daughter Jennie Dalmata (Cory) and their children Cashton Dalmata, Hadley Dalmata and Crosby Dalmata; two brothers Roger Berry (Julie) and William Berry; two sisters Debbie Oathout (Douglas) and Shirley Berry; several loving nieces, nephews and friends, and her beloved Springer Spaniel Dottie. Patty’s greatest passion and joy was spending time with her family. She was a loving mother and grandmother and a constant presence and source of support in her children’s and grandchildren’s lives. She also enjoyed cooking and baking for her family and friends, most especially for gatherings over the holidays and other special occasions. Patty also loved spending time with her beloved dog Dottie, traveling, shopping, creating hand-made cards for loved ones, and crafting with her friends. Patty requested for an intimate funeral, and private services will be held at the convenience of the family. Interment will be in the North Bush Cemetery, Caroga Lake in the spring. The family wishes to thank those who have extended condolences, as well as, to those who have given much needed emotional support during her final days. In lieu of flowers, contributions in Patricia’s memory may be made to the American Cancer Society, 1 Penny Lane, Latham, New York 12110. Arrangements have been entrusted to the A.G. Cole Funeral Home, Inc., 215 E. Main Street, Johnstown. Condolences to the family may be made online by visiting our website at www.agcolefuneralhome.com

Patricia &#8220;Patty&#8221; L. Wille, age 62 of Johnstown, passed away peacefully on Thursday, January 31, 2019 with her loving family by her side. She was born to the late Roger Berry and Shirley Brooks McCold in Pittsburgh, Pennsylvania on... View Obituary & Service Information

The family of Patricia L. Wille created this Life Tributes page to make it easy to share your memories.

Send flowers to the Wille family.