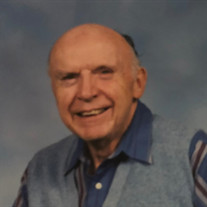 Mr. Paul E. Tooker of Meco passed away peacefully on Monday, November 26, 2018. He was a born on 7 Mar 1926 in Gloversville to the late Harold H. & Martha E. (Hunter) Tooker. Paul enlisted in the Navy on 4 Mar 1944 even before graduating from Gloversville High School. Paul served as a Radio Hand Operator and served on the U.S.S Octans and the U.S.S. Calamares until 19 Jun 1946. After returning home from serving his country Paul earned a degree in accounting and in 1948 was employed by Upstate Telephone Co. retiring after 35 years from GenTel Telephone in 1983. He was a member of the Johnstown Reformed Church. During his early years at Upstate Telephone Co., Paul met & married Anna Goot and they married in 1951. Paul and Anna enjoyed traveling across the country exploring the United States for 43 years with family and friends before Anna passed away in 1995. Paul had a love for baseball and was a huge fan of the New York Yankees. He also enjoyed bowling and for many years bowled on the “Gen Tel Men’ League Team. Through the years you would see Paul cruising around in his favorite car, his red Thunderbird. Paul also loved cats! Paul is survived by his wife Patricia D. (Husek) Oare whom he married on 24 May 2017 and they enjoyed occasional trips and were a staple at Harold’s Restaurant in Gloversville. He is also survived by one sister-in-law; Fran Goot, nieces & nephews; James & Tammy Loux, Colleen & Karl Braender, George & Janice (Smith) Morgan, August & Nancy (Smith) Rupert, Gary & Robert Lampman, cousins; Donna Fox VanAernam, Gordie VanAernam, Tom & Beth (VanAernam) Fraker, Donald Fox, Amy Fox, Kathi (Fox) Ambrosino and many more. He is preceded in death by his sister and her husband, Frank & Evelyn Smith, his brother & his wife, Harold & Carrie (Pryne), nieces Diane (Tooker) Dambrosi & Kathy (Tooker) Lampman. Funeral services will be conducted at 12:00 P.M. (Noon) on Saturday, December 1, 2018, at the A.G. Cole Funeral Home, Inc., 215 E. Main Street, Johnstown. Visitation for family and friends will be prior to the service on Saturday, December 1 from 10:00 A.M. to 12:00 P.M. (Noon) at the funeral home. Interment with military honors will be in Fern Dale Cemetery, Johnstown, immediately following the funeral service. In lieu of flowers, contributions may be made to Johnstown Reform Church in his memory. Condolences to the family may be made online by visiting our website at www.agcolefuneralhome.com

Mr. Paul E. Tooker of Meco passed away peacefully on Monday, November 26, 2018. He was a born on 7 Mar 1926 in Gloversville to the late Harold H. & Martha E. (Hunter) Tooker. Paul enlisted in the Navy on 4 Mar 1944 even before graduating... View Obituary & Service Information

The family of Paul E. Tooker created this Life Tributes page to make it easy to share your memories.

Send flowers to the Tooker family.