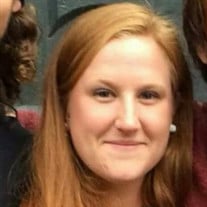 Quinn Kathleen Hart, age 34, of Johnstown, passed away on Saturday, January 1, 2022, at home. Quinn was born on June 5, 1987, in Gloversville, NY Quinn graduated from Johnstown High School in 2005, Monroe Community College in 2007, and Technical College of the Lowcountry in 2019. She was employed as a paralegal at Howell, Gibson & Hughes in Beaufort, SC until returning to her hometown to raise her family. Quinn loved the outdoors, a love that began while spending summers at her family’s camp in Caroga Lake. Quinn also enjoyed family craft nights and baking with her children. Quinn was able to find beauty in everything, a skill she used while making jewelry, decorating her home, and treasure hunting for antiques. She was of the Methodist faith and attended Waters Edge Methodist Church. Survivors include her husband, Thomas A. Hart II, whom she married on November 22, 2013, her daughter, Tallulah G. Hart; son, Rowen D. Hart; mother, Margaret A. Biron; sister, Abigail J. Ambridge; grandfather, Donald “Pop” Biron; uncle, Donald J. Biron (Karin); aunt, Kelly J. Gregorio (Scott); uncle, James M. Biron (Louise); and, her mother-in-law, Ellen E. Hart. Quinn is survived by her cousins, who were more like siblings, Bill, Jake, McKenzie, Lucas, Amy, Nate, Jason, Adam, and Jimmy. She is also survived by her beloved fur babies, Opie, and Gus. Quinn was predeceased by her grandmother, Kathleen “Nana” Biron; father-in-law, Thomas A. Hart; and, cousin, Zachary Biron. Private services will be conducted at the convenience of the family. In lieu of flowers, contributions in Quinn’s memory may be made to the Coffee Connection. The Coffee Connection is a nonprofit business integrated with a program to empower women in recovery from addiction. Monetary donations in the form of a check can be made payable to: Coffee Connections, 681 South Avenue, Rochester, NY 14620 or online at ourcoffeeconnection.org. Contributions in Quinn’s memory can also be made online to the Fulton County Regional SPCA at fcrspca.org. Arrangements have been entrusted to the A.G. Cole Funeral Home, Inc., 215 East Main Street, Johnstown. Condolences to the family may be made online by visiting our website at www.agcolefuneralhome.com

The family of Quinn Kathleen Hart created this Life Tributes page to make it easy to share your memories.

Quinn Kathleen Hart, age 34, of Johnstown, passed away on Saturday,...

Send flowers to the Hart family.