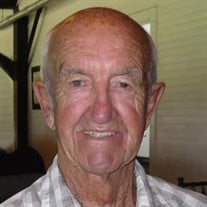 Raymond Cromer, Jr., age 98, of Caroga Lake, passed away on Tuesday, December 29, 2020 at the home of his daughter Vanessa in Gloversville. He was born on June 27, 1922 in Lassellsville, a son of the late Raymond Cromer, Sr. and Harriet Clemons Cromer. Mr. Cromer honorably served his country in U.S. Army during World War II and was awarded the Purple Heart among other medals of valor. He was employed for many years as a Truck Driver for Tanny’s Trucking in Johnstown. Raymond also worked for Brown Transportation. He enjoyed spending time with his family at his house on East Caroga Lake. Mr. Cromer especially enjoyed watching his great grandchildren Cailee and Anthony fishing, swimming and tubing behind his boat. Raymond is survived by one son James Cromer (Bobbie) of Malta, one daughter Vanessa Sheppard (Frank) of Gloversville; grandchildren Jennifer Caputo (Chris), Marc Hickok (Kate), John Darnell (Anne), Kimberly Robben, Frank Sheppard (Nikki) and Stephanie Sheppard; great grandchildren Cort McDonough, Molly McDonough, Remy McDonough, Sofia Darnell, Cailee Caputo, Anthony Caputo, William Sheppard, Weston Sheppard and Alya Bergman and several nieces, nephews and cousins. Raymond was predeceased by his wife Betty Bowler Cromer who he married on June 25, 1949 and who passed on March 7, 2006, one brother Kenneth Cromer and one sister Leona Gray. There will be no calling hours. Graveside services will be conducted at Rockwood Cemetery in the Spring. Contributions in Raymond’s memory may be made to the Caroga Lake Volunteer Fire Company, P.O. Box 536, Caroga Lake, New York 12032. Arrangements have been entrusted to the A.G. Cole Funeral Home, Inc., 215 E. Main Street, Johnstown. Condolences to the family may be made online by visiting our website at www.agcolefuneralhome.com

Raymond Cromer, Jr., age 98, of Caroga Lake, passed away on Tuesday, December 29, 2020 at the home of his daughter Vanessa in Gloversville. He was born on June 27, 1922 in Lassellsville, a son of the late Raymond Cromer, Sr. and Harriet Clemons... View Obituary & Service Information

The family of Raymond Cromer Jr. created this Life Tributes page to make it easy to share your memories.

Send flowers to the Cromer family.