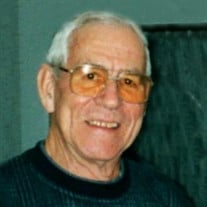 Richard Karl Hansen, age 88, of Johnstown, passed away on Monday, October 28, 2019 at the Mountain Valley Hospice House, Gloversville with his loving family by his side. He was born on October 25, 1931 in Gloversville, a son of the late Charles A. and Inez Ehrlich Hansen. Richard was a graduate of Gloversville High School. He honorably served his country in the U.S. Army during the Korean War from July of 1952 to July of 1954. Mr. Hansen was employed for over 40 years as a Cable Splicer at the General Telephone Company in Johnstown until his retirement in 1991. Richard was a proud member of the Fulton County Antique Car Club. He was also an avid outdoorsman whom enjoyed hunting and fishing. He is survived by his wife Esther J. Stahl Hansen who he married on July 12, 1952; three sons Stephen K. Hansen (Tamara) of Johnstown, James C. Hansen (Barbara) of Spring City, Tennessee and Richard W. Hansen (Melissa) of Johnstown, one daughter Bonnie Ahrens of Ephratah; six grandchildren Lindsey Hansen, Stephen B. Hansen (Amanda), Maria Sandoval, Marcy Massey, Rachel Hansen and Brianne Hansen; three great grandchildren Dustin Massey, Valerie Massey and Brady Massey, one sister-in-law Marion Hansen and several nieces, nephews and cousins. In addition to his parents, he was predeceased by his brother Charles A. Hansen whom passed on June 19, 2003. Funeral services will be conducted at 12:00 P.M. (Noon) on Saturday, November 2, 2019 at the A.G. Cole Funeral Home, Inc., 215 E. Main Street, Johnstown with Rev. Dr. R.W. Williams officiating. Visitation for family and friends will be on Saturday, November 2, 2019 prior to the funeral service from 10:00 A.M. to 12:00 P.M. (Noon) at the funeral home. Interment with Military Honors will be in Rockwood Cemetery immediately following the funeral service. Contributions in Richard’s memory may be made to Mountain Valley Hospice, 108 Steele Avenue, Gloversville, New York 12078 or to the James A. Brennan Memorial Humane Society, 437 Nine Mile Tree Road, Gloversville, New York 12078. Richard’s family would like to thank the Staff at Wells Nursing Home and at the Mountain Valley Hospice House for their care and compassion. Condolences to the family may be made online by visiting our website at www.agcolefuneralhome.com

Richard Karl Hansen, age 88, of Johnstown, passed away on Monday, October 28, 2019 at the Mountain Valley Hospice House, Gloversville with his loving family by his side. He was born on October 25, 1931 in Gloversville, a son of the late Charles... View Obituary & Service Information

The family of Richard Karl Hansen created this Life Tributes page to make it easy to share your memories.

Richard Karl Hansen, age 88, of Johnstown, passed away on Monday,...

Send flowers to the Hansen family.