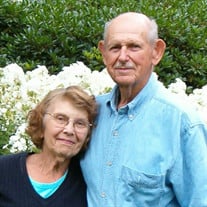 Robert Lawrence Brandis, 92, got his final wish and passed away peacefully at home on Monday, September 16, 2019 surrounded by his loving family. Robert was born in Brooklyn, New York on January 16, 1927 to Frederick E. Brandis and H. Mildred Lawrence Brandis. Due to the nature of his father’s work the family was transferred many times during his early years from St. Albans L.I. to PA to Indiana and back and forth to NY State. He graduated from Ithaca, NY high school in 1944, following which he enlisted in the US Navy where he served in the Marshall Islands during WWII. He was honorably discharged from the Navy as Seaman First Class in July of 1946. Mr. Brandis attended Hofstra, Brooklyn College and the NYS Institute of Technology following which he was employed as a chemist with Consolidated Edison Laboratories in Astoria, Queens and later with Hudson Industries Corp. until his retirement in 1987, having been employed by the company for 36 years. During this time he served in various capacities including chemist, director of technical services, vice-president and general manager. He was a contributing author of Handbook of Adhesives published in 1990. He married Janet Velders of Quaker Springs, NY in 1950 having met in college. The couple moved from Livingston, NY with their four children to their home on Murray Hill Road, Ephratah in 1974 when he was transferred from Hudson. In recent years the Brandises became known in the area for raising asparagus, strawberries and blueberries. Over the years Mr. Brandis has been involved with Boy Scouts, Cub Scouts, and Little League. He served as a volunteer fireman, town constable, sole-trustee in the school district and in various capacities in the Reformed Church in Livingston, NY. He was elected President of Cornell Cooperative Extension of Fulton Co. Board of Directors in 1994 where he was previously a member of the board for 4 years as a director-at-large. Mr. Brandis is predeceased by his wife, Janet Velders Brandis, of 62.5 years who passed away in April 2013 and his sister, Ann Brandis Kain who passed in 2009. Mr. Brandis is survived by his children, Dr. Robert A. Brandis and wife, Laura Brandis of Saratoga; Susan Brandis Turner and husband, Ernest Turner of Mayfield; James M. Brandis and partner, Maureen Gilmore, of Saranac and Scott L. Brandis and partner, Jason A. Jones of Athens, GA. Grandchildren Carolyn Brandis and husband, Ben Smith, of Queensbury; Jeffrey Brandis of Saratoga; Lauren Turner of Mayfield; Eric Turner and wife, Amber of Northville; Stephen Brandis of Virginia; Kristen Brandis of North Carolina and their mother Deborah Davis Brandis also of North Carolina. Robert also had the privilege of enjoying his great grandchild, Ethan R. Turner of Northville, NY who he loved to greet Papa with a “high-five”. Private services will be held at the convenience of the family. Memorial contributions may be made to Mountain Valley Hospice, 108 Steele Ave., Gloversville, NY 12078. Arrangements have been entrusted to the Barter & Donnan Funeral Home, 1 N. Melcher Street, Johnstown. Condolences to the family may be made online by visiting our website at www.barterdonnan.com

Robert Lawrence Brandis, 92, got his final wish and passed away peacefully at home on Monday, September 16, 2019 surrounded by his loving family. Robert was born in Brooklyn, New York on January 16, 1927 to Frederick E. Brandis and H. Mildred... View Obituary & Service Information

The family of Robert Lawrence Brandis created this Life Tributes page to make it easy to share your memories.

Robert Lawrence Brandis, 92, got his final wish and passed away...

Send flowers to the Brandis family.