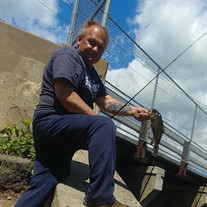 Robert G. “Bobby” Brooker, age 58, of Meco, passed away on Sunday, July 19, 2020 at Albany Medical Center. He was born in Gloversville on December 15, 1961, a son of Larry Ten Eyck, who survives and the late Helen A. Masarik Brooker Ten Eyck. Bobby was a graduate of Johnstown High School. He was employed as a Foreman at Keymark Corporation in Fonda for many years. He was a member of the Johnstown Moose and enjoyed playing in pitch tournaments there. He is survived by his wife Patricia Hill Brooker who he married on May 26, 2017; five sons Kristian Brooker, Reggie Brooker (Anna), Al Brooker (Makayla), Zack Brooker (Rebecca) and Vinny Brooker; three daughters Amanda Leon (Eddie), Destiny George and Cheyenne Getwright (Eric); two stepsons Joshua Ohl (Heather) and Daniel Dunlap; four brothers Gerald Brooker, Steve Brooker, Pat Brooker (Lisa) and John Brooker, one sister Holly (Bob), stepfather Larry Ten Eyck; twenty-three grandchildren, one step grandson Jonathan Ohl and several nieces, nephews and cousins. In addition to his parents, Bobby was predeceased by his brother LeRoy Brooker. In keeping with Bobby’s request, there will be no calling hours. Cremation was at Vale Crematory, Schenectady. Arrangements have been entrusted to the A.G. Cole Funeral Home, Inc., 215 E. Main Street, Johnstown. Condolences to the family may be made online by visiting our website at www.agcolefuneralhome.com

The family of Robert G. Brooker created this Life Tributes page to make it easy to share your memories.

Send flowers to the Brooker family.