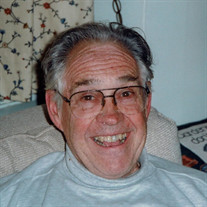 Robert M. Milford, Jr., age 95 of Schenectady, went to heaven on Saturday, June 22, 2019. He was born on November 20, 1923 in Johnstown, a son of the late Robert M. Milford and Marguerite H. Dean. Bob graduated from Johnstown High School in 1941. He then attended Syracuse University where he received his Bachelor’s Degree in 1947 and was a proud member of the Delta Kappa Epsilon (“Dekes”) Fraternity. During college he was also enrolled in the U.S. Navy Officer Training School and in 1945 he was honorably discharged. Bob met the love of his life, Carol, in Brooklyn, NY and they were married in 1950. After they started their family, they moved to New Jersey where he was employed for many years as a Librarian at Fairleigh Dickinson University in Madison. Later in life Bob accepted Jesus as his personal lord and savior and became a member of Long Hill Chapel in Chatham, NJ. Bob also volunteered for the Seeing Eye in Morristown, NJ and eventually adopted several dogs from them. This started his love of all dogs but especially Golden Retrievers. Recently, he supported and was able to visit Yankee Golden Retriever Rescue Organization of Hudson, Massachusetts. He is survived by his children, Robert M. Milford, III (Yvonne) of Mentor, Ohio; Susan M. Bandy (Greg) Of Scotia, NY and David W. Milford (Linda) of North Greenbush, NY; and many grandchildren, great grandchildren, nieces, nephews and cousins. Bob was predeceased by his wife Carol; two brothers John Milford and Alan Milford and two cousins Bill McGregor and Peg McGregor. Bob will be remembered for his quick wit and sense of humor as well as his love for Syracuse University and his Adirondack cabin where many memories were shared with his loving family. The family would like to express their heartfelt thanks to the caring and compassionate staff of Kingsway Arms Nursing Center for taking such good care of Bob, especially in his final days. In keeping with Bob’s wishes, there will be no calling hours. A memorial celebration of his life will be conducted on August 31, 2019 at 11:00 AM at the family plot at Johnstown Cemetery. All are welcome. Contributions in Robert’s memory may be made to Yankee Golden Retriever Rescue at www.yggr.org Arrangements have been entrusted to the A.G. Cole Funeral Home Inc., 215 E. Main Street, Johnstown. Condolences may be made online by visiting our website at www.agcolefuneralhome.com.

The family of Robert M. Milford Jr. created this Life Tributes page to make it easy to share your memories.

Send flowers to the Milford family.