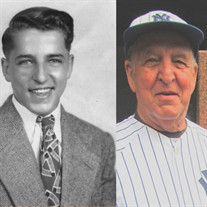 Ronald C. Preston, age 91, of Johnstown passed away peacefully on Monday, April 26, 2021 at home. He was born in Johnstown, New York on September 5, 1929 to Darryl and Leona Hutchinson Preston. He is survived by his wife of 72 years, the former Shirley Knoblauch, whom he married on September 11, 1948. He is also survived by his son Larry (Carol) Preston and daughter Linda VanSlyke, both of Johnstown, as well as by his grandsons Brett Preston, Grant (Kimberly) Preston, Christopher Preston, Matthew (Lisa) VanSlyke and Nathan VanSlyke, and his eight great-grandchildren: Julia Preston, Abigail Preston, Jack Preston, Hailey Preston, Cole Preston, Jackson VanSlyke, Marlia VanSlyke and Preston VanSlyke. He was predeceased by his five brothers Ralph, Theodore, Darryl, Merton and Keith Preston. He is also survived by many nieces and nephews. Ron is well remembered in the community as the long-time manager of the A&P supermarket in Johnstown and later, the A&P store in Gloversville. Following his retirement from the A&P, he served as manager of the Stewart's store in Northville, where he made many new friends in that community. He genuinely liked people and could strike up a conversation with anyone. He was a lifetime member of the Moose Club and was recognized for more than 60 years of consecutive membership. He was a member of the Reformed Church of Johnstown. He was a fan of the New York Yankees and enjoyed attending baseball games at Yankee Stadium with his son, grandsons and grandchildren. He also enjoyed family trips to Florida where he could be found riding roller coasters at the theme parks into his 80's. His big smile, outgoing personality and sense of humor will be a lasting memory for all who knew him. Ron's family would like to give special thanks to his caregivers for their thoughtful and compassionate support. A private service will be held at the convenience of the family. Arrangements are being entrusted to the A.G. Cole Funeral Home. Memorial contributions in Ron's memory may be made to Mountain Valley Hospice, 108 Steele Avenue, Gloversville, NY, or to the charity of one's choice.

Ronald C. Preston, age 91, of Johnstown passed away peacefully on Monday, April 26, 2021 at home. He was born in Johnstown, New York on September 5, 1929 to Darryl and Leona Hutchinson Preston. He is survived by his wife of 72 years, the... View Obituary & Service Information

The family of Ronald C. Preston created this Life Tributes page to make it easy to share your memories.

Send flowers to the Preston family.