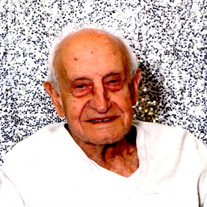 Rosario Licciardi (“Rosie”, “Sato”), age 98, of Johnstown, passed away on Tuesday, August 27, 2019 at the River Ridge Living Center, Amsterdam, surrounded by his loving family. He was born on January 24, 1921 in Johnstown, a son of the late Salvatore and Carmela Mannino Licciardi. Rosario was a Class of 1940 graduate of Johnstown High School. He honorably served his country in the U.S. Marine Corps during World War II, receiving the Purple Heart for his valor in the Battle of Iwo Jima. Mr. Licciardi was employed for over twenty five years as the Foreman of the H.C. Pitman Glove Company in Johnstown. He later worked for twenty years as a Youth Aide at the New York State Division of Youth, Tryon Facility in Johnstown. Mr. Licciardi was of the Catholic faith, a communicant of the former Immaculate Conception Church in Johnstown. Rosario was active in the Church activities especially with the Annual Church Festival and serving as chairman. He was a member of the Knights of Columbus, Johnstown Eagles, Johnstown VFW and American Legion. Mr. Licciardi had a remarkable work ethic and was a quiet strong leader who was devoted to his community and family. Rosario’s life and legacy reflect the loving and caring faith-based person he was. He dedicated his entire life to serving others before himself. His kind and loving spirit will live on through those celebrating his life. He is survived by his two children Camille Smullen of Gloversville and Anthony J. “Nino” Licciardi (Tina) of Vail, Colorado; six grandchildren Camden Callan (Michael), Garner Agone (Emily), Talia Agone (Lance), Landria Stinson (Julius), Stephen Licciardi and Timothy Licciardi; great grandchildren Grady, Annie and Wesley Agone, Brooke and Grace Callan, Rylin and Roux Stinson and Esmeralda and Yadira, sister-in-law Margaret Licciardi and several nieces, nephews and cousins. Mr. Licciardi was predeceased by his wife Anne Romano Licciardi who he married on September 5, 1948 and who passed on November 19, 1995; three siblings Bartolo Licciardi, Joseph Licciardi and Theresa Ruggeri and brother-in-law Charles Ruggeri. Memorial services will be conducted at 5:00 P.M. on Friday, August 30, 2019 at the Barter & Donnan Funeral Home, 1 N. Melcher Street, Johnstown with Father Matthew Wetsel officiating. Memorial visitation for family and friends will be prior to the service from 3:00 P.M. to 5:00 P.M. at the funeral home. A Memorial Mass and interment in Colorado will be conducted in Mid-October 2019. The Licciardi family would like to give special thanks to the staff at River Ridge for “Rosie’s” exemplary care. Contributions in Rosario’s memory may be made to the National St. Kateri Tekakwitha Shrine, PO Box 627, Fonda, New York 12068 or online at www.katerishrine.com. Condolences to the family may be made online by visiting our website at www.barterdonnan.com

The family of Rosario Licciardi created this Life Tributes page to make it easy to share your memories.

Send flowers to the Licciardi family.